Neckscars are one of those bands that I can't quite place how I first heard them. Formed in 2018 and from New York, I haven't seen them live or read anything much about them, but what I did know was I've been really looking forward to this album after hearing a few songs online in recent months.

Don't Panic is their debut full length, recorded last year in two parts thanks to COVID, but released this summer on Sell The Heart Records in the US and Engineer Records in the UK. If you like your gravelly voiced, hook-laden, melodic punk in the vein of Hot Water Music, Dillinger Four, Gameday Regulars et al (three of the four members of Neckscars were in the latter), this is going to be right up your street. 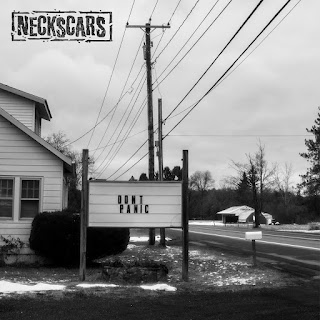 The album opens up with the first track In Front Of Me. Straight into feedback, smashing drums and then melodic guitars, I know within seconds that I love it. It's animated with those harmonic, sing-a-long vocals that are just simply my favourite type, which is then continued into the second song Born Sick.

The energy is then taken up yet another notch with Jarring, the song released online as a single earlier in the year. The guitars swell and the melodies form to create one of the album's standout tracks.

Unfinished starts a little slower, it is introspective  and compels me to really listen to the narrative. As I do this, the song quickens and fast guitars sync with ringing vocals. I truly love it.

The concluding track of the first half is then Not Enough JPMs. It's a return to the faster combative pace of a couple of the earlier songs, rounding off side one in great style.

Side two offers up much of the same. A couple of tracks with slightly less rapacious guitars than others, but all with the recognisable gruff harmonies that are begging to be played and seen live. Loaded is probably the standout track on this side for me.

The album concludes with First Time, Long Time which features a guest appearance from Jon Snodgrass – another banger – formerly of Drag The River and now serial collaborator on most things gold.

There's lots of familiar punk themes throughout – unsteady self doubt and anxiety. A well trodden orgcore road perhaps, but it just seems to fit so well with this brand of catchy, fist-in-the-air punk.

With 10 songs in 30 minutes, the album also hits the sweet spot for optimum enjoyment of a punk record. There's no duds on here and so the formula means the album retains your whole focus from start to finish.

I've no doubt this will be on my best of the year list, although it has to be said this album won't get the recognition it deserves. People will say they've heard this thing many times before. That maybe the case, but I say "so what?", there's a reason for that and that's because music like this makes my heart beat and soar that little bit higher and faster than usual. Always have and always will. It's why why I love bands like Neckscars and their brand of punk so much.

This review was written by Chris Bishton.