Gig Review: Out Of Love Debut Show at The Craufurd Arms, Milton Keynes 17/9/21

I’m not sure many new bands have earned more hype over the last eighteen months than Out Of Love. The hype began for me when I was sent their first single S.L.U.M.P and was absolutely amazed by the band. This was in early 2020 and then we all know what happened with the rest of that year and the beginning of this one. During the time when bands couldn’t play live, Out Of Love managed to release two superb EPs on Venn Records and continued to grow their fanbase. Eventually gigs were able to come back, Out Of Love finally announced their first two shows. The first being at the Craufurd Arms in Milton Keynes and the second at The Engine Room in London. I was over the moon to see that the first show would be at the Craufurd Arms as it’s one of our most local venues. Tickets were free but limited so I snapped ours up quickly and excitedly waited for day of the gig. 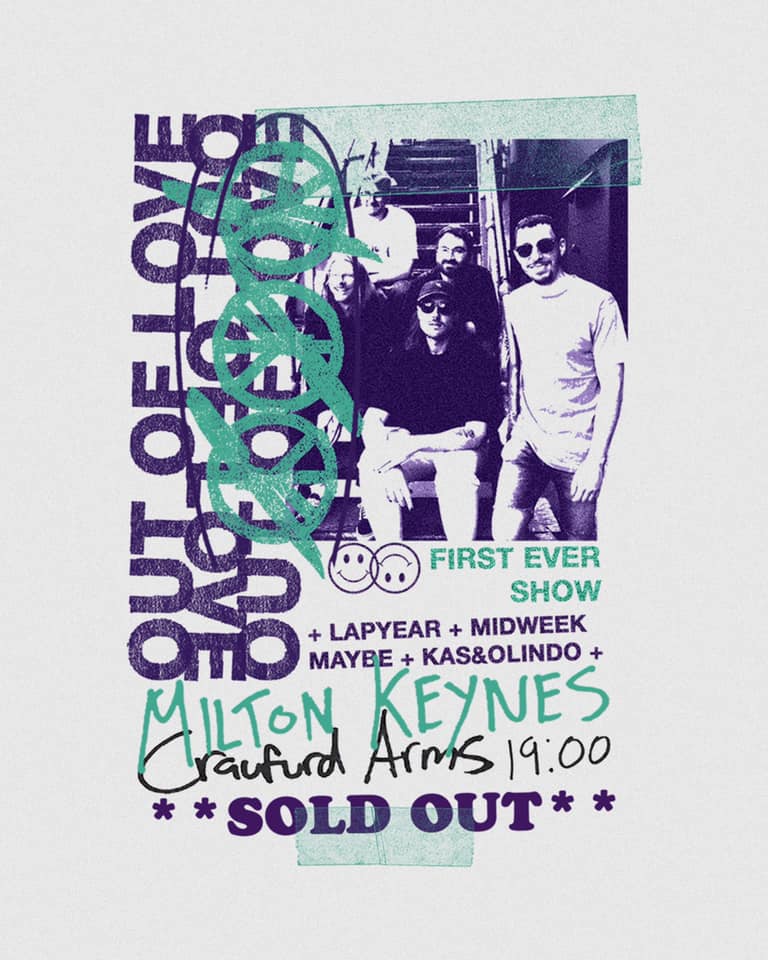 A trio of the band’s friends were booked for the gig which helped create a great atmosphere for the entire night. The gig was actually taking place in the bar area of the Craufurd Arms instead of the main venue room. This was my first time attending a gig in the bar and I later found out that they had constructed a small stage for the event. The first act to take to the stage was hip hop duo Kas and Olindo. Kas was in charge of spitting bars (hip hop terminology I’ve picked up from the yoofz) and Olindo played drums alongside a backing track. This was my very first time seeing a hip hop act live and, while it’s far from my favourite genre of music, it was interesting to watch. Kas prowled around the stage during the set and I found him very engaging to watch. Between songs he spoke about the amount of friends in the room and seemed so genuinely happy to be back on stage after so long. As I said, musically this wasn’t really for me but I did appreciate the effort that went into the set and the messages that they promoted. 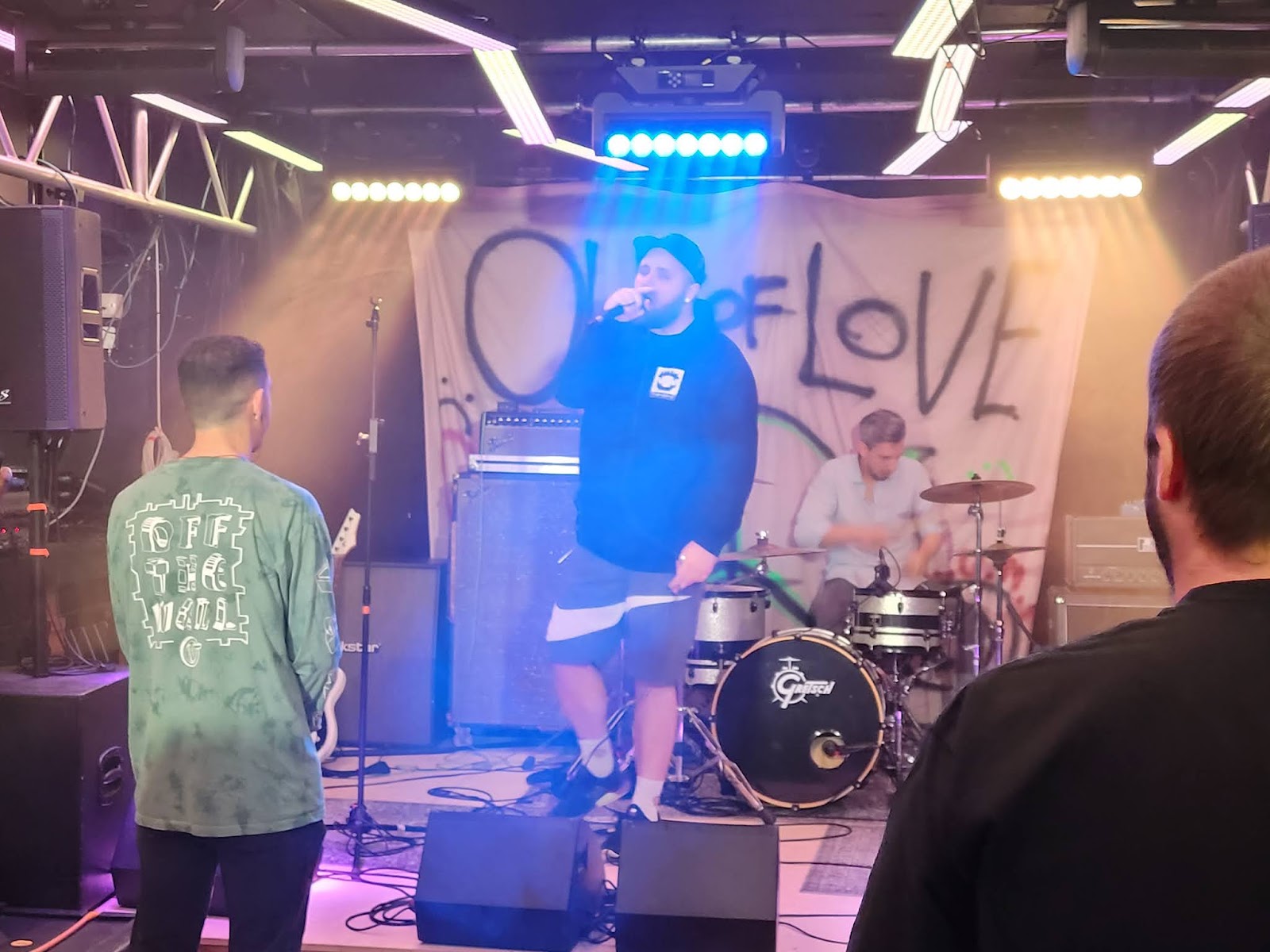 Next to take to the stage were three piece pop punk band Midweek Maybe. My first impressions of the band was that they play music solely for their own entertainment and if other people like it then that’s a bonus. Unfortunately there were some guitar issues with the first song which the band laughed off before quickly switching guitars and carrying on. I absolutely hate to say it but there did seem to be some issues with the sound throughout the set which did stop me enjoying the set as much as I think I could have. It seemed to me that the drums overpowered the vocals, making it hard to really understand the lyrics to the songs. I did enjoy the banter between the songs however and it’s clear these guys have been great friends for years. There was a nice moment where Kas joined the band on stage to help sing a song that he had helped write. From what I understood they were in a band together in the past and this is how they knew each other. Since the gig I’ve checked out Midweek Maybe online and have been very impressed with their sound. 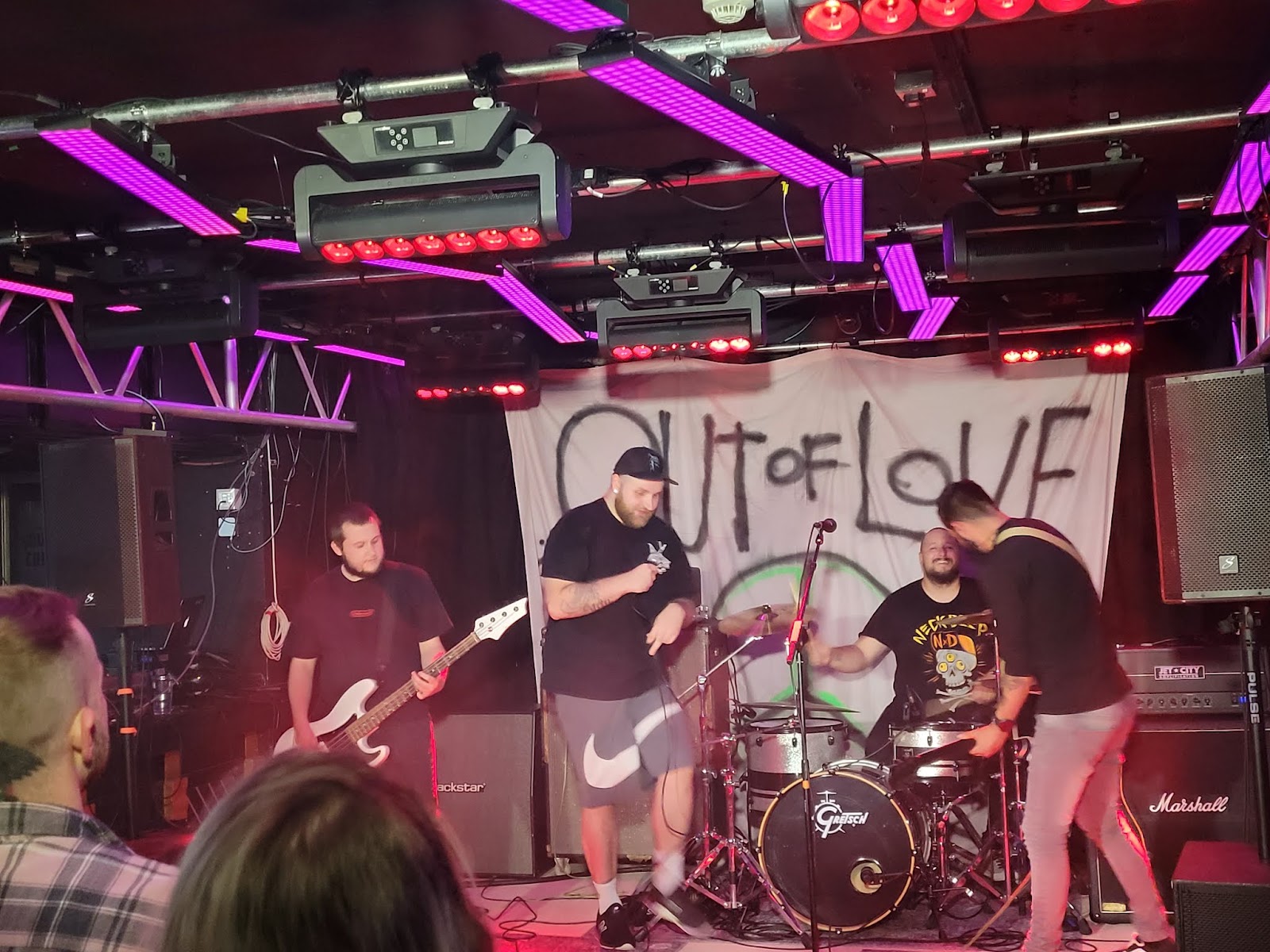 The penultimate act of the night were Hertfordshire emo punks Lapyear. Whatever sound issues there were for Midweek Maybe they seemed to disappear for Lapyear. I do wonder if it was potentially because I moved to a different spot in the room? Lapyear play a twinkly type of emo that really showed off the band’s technical ability. I know that the band have played some shows since they came back post-pandemic and it showed because they were slick. The band were very watchable live, in particular their guitarist who seemed to get lost along with the music. I’m not a massive listener of emo music but when it’s played as well as this you can consider me a fan. There was plenty of emotion but also a good amount of punk bite during their set. The band’s lead singer had a really good voice and was very well backed by the rest of the band. They stated that this was their first time in Milton Keynes so of course they, did as every band that comes through does, made a joke about the amount of roundabouts. Lapyear finished their set with a longer song that really took you on a roller coaster to finish a great set. 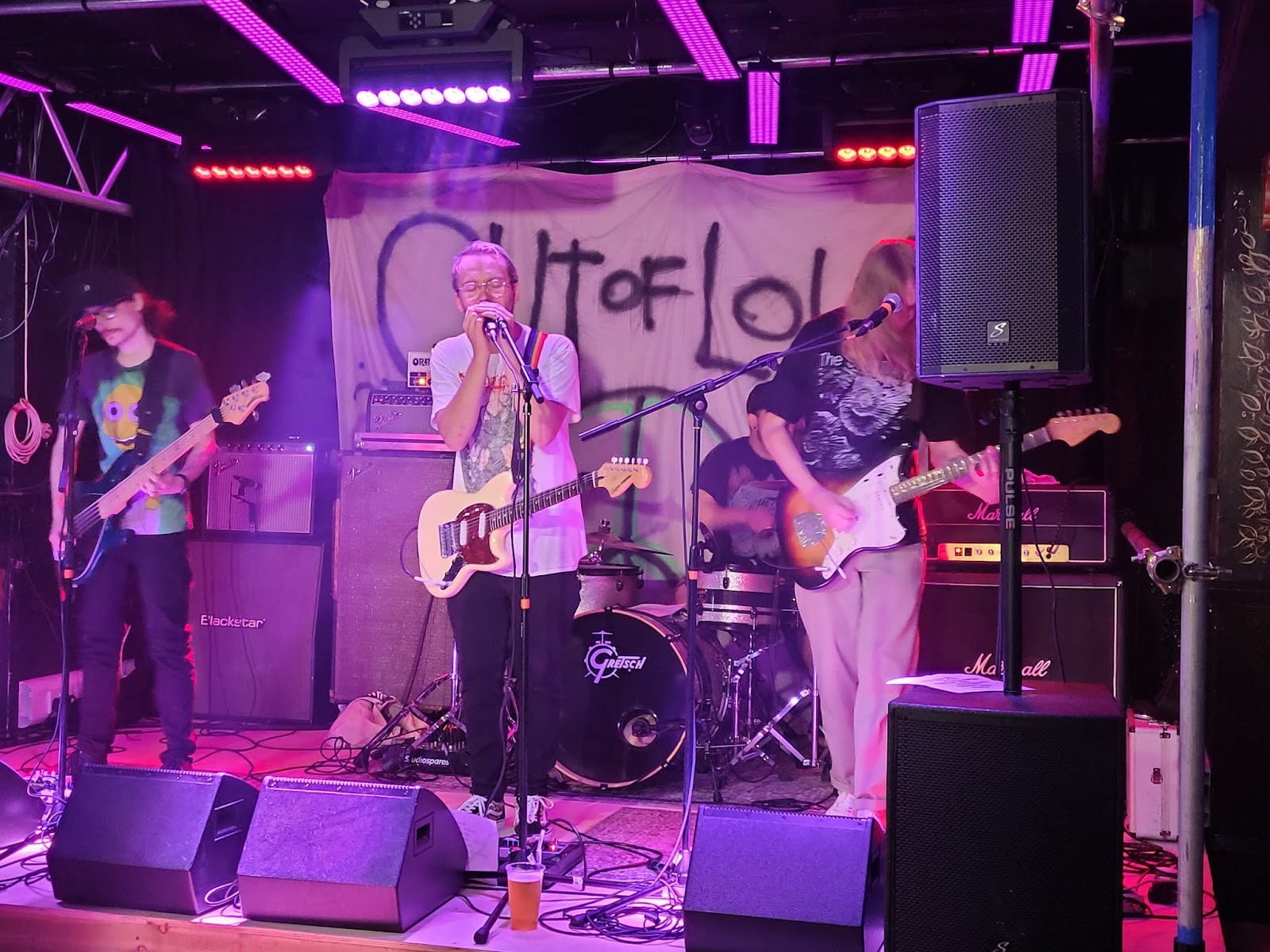 It was finally time for Out Of Love. And when I say finally I mean after 500 odd days of waiting to see them live, not that the night was a long one. Before the five piece took to the stage the floor was filled with pink and yellow balloons adorned with the Out Of Love logo. The band then ushered everyone to get as close to the stage as possible to make it feel like a punk show. What then followed was a joyous set playing all the songs from both EPs. I wish I could remember the order of songs that were played but I’m writing this a week after the gig and I forgot to write any notes – I’m out of practice! What I can say is that every song did earn a big sing-along from the crowd, much to Out Of Love’s delight. This was the band’s debut show but watching them you would have thought they’d been playing live together for years. Much like Lapyear, they were super slick for the entire set. I know the guys have been in previous bands but I’m not sure if they were with each other. It was nice to see the massive smiles that remained on the face of Out Of Love throughout their set. We’ve been waiting for this set for a while but they’ve been waiting even longer and it felt like it was quite a cathartic moment for the band to really release this collection of songs to the world. I always feel like punk bands write their songs to perform for crowds and it must have been horrific to not be able to do so for so long. The band finished the set with their first ever single S.L.U.M.P. which earned one final sing-along. This was such a triumphant debut show for the band and it proved to me, at least, that they deserve all of the hype they’ve been getting and perhaps should be getting more. 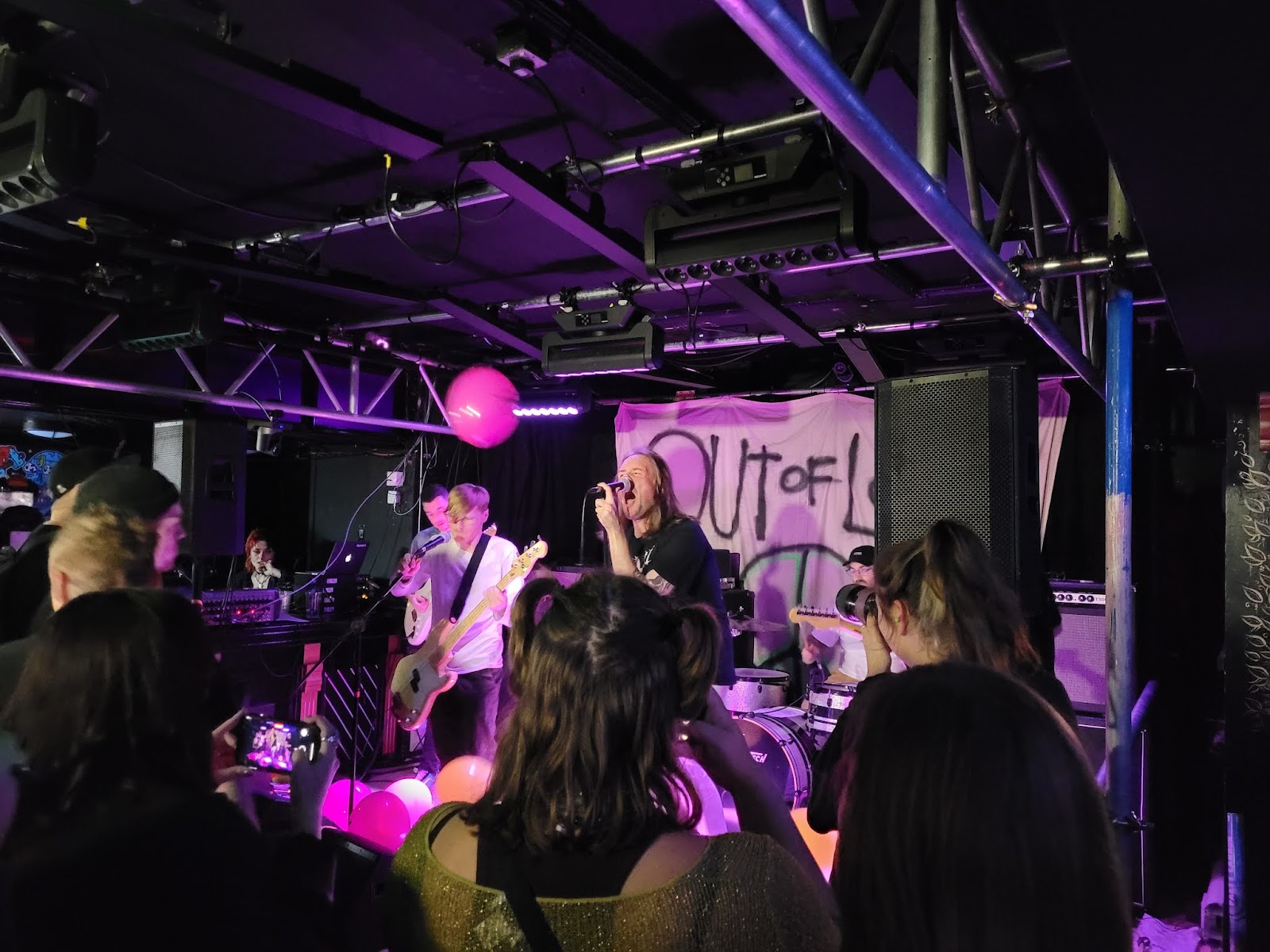 Out Of Love could do some pretty amazing things in the future and I’m looking forward to boasting that I was at their first show. I can’t wait to see them again when they take to the stage at Till The Fest in early October.
This review was written by Colin Clark.
Posted by ColinsPRW at 11:56:00