Album Review: Between The Richness by Fiddlehead (by Richard Mair)

Hardcore is going through something of a creative renaissance. Drug Church stand out as the leading lights with a sound that has equal parts in common with 90s alt-rock bands such as the Pixies as they do with Minor Threat or Gorilla Biscuits; or take the bonkers noise inspired shenanigans that The Armed released with Ultrapop, an album that is equal parts Converge styled metalcore fused with ridiculous pop songs of noise merchants Fang Island. A further point to consider in this evolution is the role influential icons play in expanding the sound. For example Patrick Kindlon of Self Defense Family fame using Drug Church as an experimental release of ideas or the re-emergence of Brian McTernan as a focal point in Be Well also demonstrates the potential for scene legends to reinvent and reinvigorate a scene that at times can be static. Against this is the sphere in which Fiddlehead operate. A band that emerged into the world on the back of a much loved and respected icon, yet at the same time so very different to what had come before. Comprised of members of Have Heart and Basement, the lineage is truly astounding and yet it’s the personal introspection into the deepest emotions of frontman Patrick Flynn that is central to what makes Fiddlehead unique.

Now I must admit their debut album was in every sense a slow burner. It didn’t grab me initially. That’s not to say it wasn’t good; it just took me the best part of a year to click. Since then it’s been on rotation constantly and a follow up easily on the most wanted list… thankfully it doesn’t disappoint. In fact it ups the ante and some. Between The Richness is a triumph in every sense; it’s doubled down on everything that made Springtime and Blind so revered. It’s creative, emotional and, above all else, full of heart and soul that further explores Patrick Flynn’s personal family history and story. 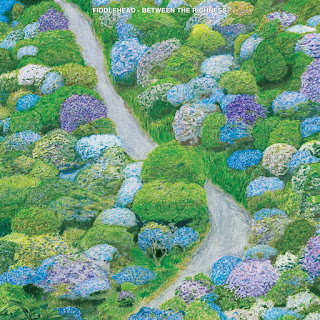 Continuing the overriding theme of loss that drove Springtime and Blind, the opening track (“Grief Motif”) is introduced via a spoken word poem (that also concludes the album – bringing it neatly full circle) of E. E. Cummings. Its theme of loved ones staying with you in your heart shows that, whilst the grief and despair from the first album has somewhat moved on to a more hopeful realisation of happy memories, the principle remains the same. This is an album that delves into the deepest recesses of the human psyche. Exploring the depths of Patrick’s emotions and, in particular, this time around his hopes and fears for his own family. Throughout the album this feeling of anxiousness and being responsible for new life permeates all its facets. Images like watching loved ones sleep (“Joyboy”), living with academic pressure (“Down University”), or drifting apart and reconnecting with people – especially lovers – (“Million Times”) are central to the album. It digs the depths of human emotions and experiences to put into words what so many fail to articulate and does so beautifully. Every song is a genuine sing-along anthem; yet at the same time it remains very ‘adult’ in its approach to angst. Iron Chic this is not, yet I’d argue it’s equally as cathartic and explosive.

The spoken word intro gives way to an almost chant like refrain that echoes to the words “fall apart” through its brief runtime. Despite its upbeat nature (and likely fan favourite appeal in much the same way the chant of “Through our bleeding we are one” is synonymous with AFI) its second track “The Years” which really kicks things off, creating a one-two opening combo akin to Spanish love Songs Nuevo into Sequels, Remakes & Adaptations.

“Million Times” is a more sedate song by and large, although the chorus is an explosion of emotion and the song’s final third is a joyous fist pumping release. It’s a genuine pop song hidden in a post hardcore aesthetic. It gives way to the most punk rock song on the album. “Eternal You” is a gruff punk anthem; played at breakneck speed and with a angsty, angry vocal delivery that makes it stand out on the album where everything is much more nuanced. It concludes with another spoken word section which continues to tell the underpinning story behind the whole collection. In a similar vein, “Down University” is a straight forward “rocking” song, which reminds me of No Division-era Hot Water Music complete with cheerleader vocals, whilst “Get My Mind Right” shares its DNA with the more hardcore roots of the band. The up tempo songs really stand out as being of the highest quality, crafted with precision and guile that keeps things fresh. Nothing feels repeated or forced. Between The Richness is a real storyteller’s journey of an album and, whilst it can certainly be enjoyed by dipping into the odd song, it’s best savoured from front to back where the ebbs and flows; peaks and troughs come to life.

Where Fiddlehead excel is in subverting expectations. The personnel are known to be excellent at creating bludgeoning noise but “Loverman” and “Joyboy” are soft, gentle emo-tinged songs that are as delicate as they are powerful. Both are high points on the album, punctuating the more pronounced aggressive songs with real moments of beauty.

The culmination of this angst is “Heart To Heart”; a truly monstrous, massive, epic song. Led by a deep throbbing bass line, it’s the release the album has building towards. On one hand there is an acknowledgement of letting go of the past but perhaps more importantly it feels like the conversation Patrick never had with his own father; that he is telling his own children he will be “in the springtime afternoon” or “be the sunlight” that surrounds them when he is no longer here. “Heart To Heart” is a masterpiece of writing anthemic stadium songs in a hardcore style. Much like Be Well’s “Confessional” of last year, it rounds off an essential piece of modern hardcore with one of the single greatest songs of the last few years. The parallel with that particular song is uncanny, both serving as acknowledgements to the writer’s own children on the aspirations and concerns they harbour for those they hold most dear. Both round their albums off in a real sombre but hopeful and beautiful way.

What took me so long to ‘get’ with their debut wasn’t that it was inaccessible but that the album made you work to appreciate its hooks. This time round I’d argue Fiddlehead have truly nailed their sound. It’s very unique; certainly it’s melodic, and has a real crowd pleasing hardcore sound but it’s also very much an ‘adult’ sound. It doesn’t treat the listener as a child or as someone with a short attention span. At times, it borders on the fringes of art in much the same space that The Armed operate. This approach to thinking man’s hardcore is great to see in a scene that can appear to the outside world as needlessly aggressive. I’d hope that Fiddlehead prove to be a gateway for many more to find out about bands such as Have Heart et al; whilst influencing a new generation of hardcore kids to be equally as creative and inventive with the tropes and constraints associated with the scene.