Album Review: You Didn't Doubt by Chartreux (by Chris Bishton)

You Didn't Doubt This is the debut from Leipzig's German punks Chartreux. Released on the always brilliant Gunner Records earlier this year, it's only seven songs long which, for me, makes it too stretched to be an EP, but a little short to be classed as a full album. Not that this is in anyway a problem and, as the saying goes, all killer, no filler. Mini album anyone? Further, given the band only played their first show in February last year just before everything stopped, it's obviously been a tricky time to record and release anything so I'm willing to go with the band's assertion this is their first full length record. And it's a great first full length too – DIY skate punk meets hardcore, but with a bit of gruff Gainesville influenced sing-a-long anthemic punk in the mix as well. 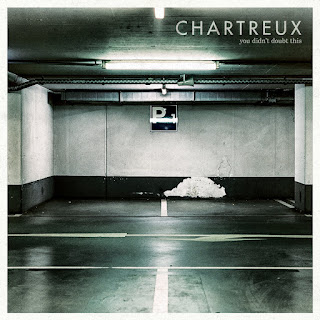 The opening track is Role Play. A raucous and blisteringly quick start, with lyrics that are gruff and shouted in English. The guitar playing reminds me of 90s/00s Pulley, although the vocals are definitely grittier. It slows a little towards the end, but at less than two minutes, it still flashes by.

The blink and you'll miss it MO continues with Harriet. Having listened to the (mini) album a few times now, I actually think this is probably my favourite track. It's also under two minutes, but the vocals are a little more jaunty and lend themselves to a sweaty room, gang sing-along.

The lengthy (just over two minutes, haha) Nods And Handshakes is the third track. By now as a listener, I know what to expect and it's obviously nothing particularly different or out of place, but it's still solid, shouty punk with a great swagger to it.

The rest of the album follows suit. Liberation Day is perhaps the most "hardcore" of the remaining songs. Screeched, sweary vocals remind me of a track that you might hear on a Pears album. It's fast, then slow, angry and passionate.

The album concludes with Repeat Rewind. At three minutes it's epic in duration compared to some of the other songs, which is mainly down to a 20 second intro. However, the pace and passion isn't compromised and there's no cutesy, whimsical finish to this record. As the title suggests, it simply leaves me wanting to put the whole thing on again right back at the start.

German punk is in a great place at the moment. Peers and contemporaries include Arterials, Hell & Back, Captain Asshole, Sidewalk Surfers, Primetime Failure (I could go on, but you get the idea) and I fully expect Chartreux to become a regular fixture on the Booze Cruise line-up. If I ever get to Hamburg, they'll be another of my "must see" German bands.
Stream and download You Didn't Doubt on Bandcamp here.
Like Chartreux on Facebook here.
This review was written by Chris Bishton.
Posted by ColinsPRW at 11:52:00