Album Review: How To Survive By Getting By by Fine And Great

Fine And Great are a three piece from Munich, Germany, featuring three friends who have played in different bands of varying genres for years. In 2019 they decided to get together for a new band to share their combined love of emotionally charged pop punk music. Early in 2020 they released their first single Three Sheets To The Wind before lockdown happened and put a bit of a halt to everything. Not deterred, the band managed to write and record their first EP, the appropriately titled How To Survive By Getting By which was then released in July 2021 on Midsummer Records. 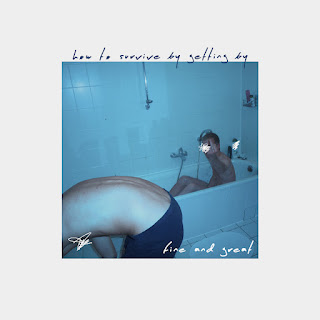 The EP begins with Happy New Year. I do wonder if this is a continuation of the second song on Three Sheets To The Wind – Merry Christmas. I really hope it is and not just a happy coincidence. After a little atmospheric reverb, the song jumps into life. Immediately the song is packed with energy before guitarist Manu’s vocals come in and things slow down. The song is full of great little tempo changes that allow the song to build and the listener to get emotionally invested into it. For me the best moments are when Manu and bass player Tooney combine to create some sweet gang vocals. The second track, Ghetto Chicken, was released as a single in the lead up to the EP’s release. It begins with some welcoming “whoa-ohs” before Tooney’s vocals start and then Manu comes in to take the lead. The way in which the two interchange vocals is really good. The chorus is a real ear worm and features the EP’s title How To Survive By Getting By. The track is about realising you’re not okay but finding a place that helps you feel better. The ending of the song is a real treat with Tooney and Manu trading lines before the two combine to finish things off in real style.

Going Nowhere starts with a nice noodly guitar riff before the song really kicks in. Tooney takes the main vocals on the track whilst Manu provides some excellent harmonies. Both singers seem to strain their vocals more on the chorus creating a great sense of urgency that I really enjoyed. The track is about being in a relationship and not being sure where it’s going, giving you some emotional stress. The penultimate song is titled Stole The Liquor. Fine And Great also released this track as a single before How To Survive By Getting By came out. This was a great choice as it really encapsulates what Fine And Great are all about. The song is packed with builds, great vocals, harmonies and beautiful story telling. There’s a moment in the song where Manu lets out a shout that you would most likely expect from his other band, Captain Asshole. It’s a rare moment on the EP that really showcases the pain in his voice. Finally we have the track Okay. Once again the song starts quietly and takes a good while before really reaching its highest moments. The vocals contrast on the track with Tooney’s cleaner vocals against Manu’s gruffer style sounding brilliant. When the song reaches its final section it gives you the highlight of the entire EP. The sound, especially for a three piece, is huge and this huge climax finishes How To Survive By Getting By in a fitting way.

What a debut from Fine And Great. Obviously the band have plenty of experience from their other bands but to come together, in such a difficult time, to create something as good as this EP really shows what a talented band Fine And Great are. With gigs slowly starting to happen again around the world I would expect to see Fine And Great on many line ups throughout Germany and perhaps the rest of Europe too. This is another band that really showcases the amazing amount of talented bands that reside in mainland Europe and another I urge the fine folk of the UK to check out. You won’t regret it.
Stream and download How To Survive By Getting By on Bandcamp here.
Like Fine And Great on Facebook here.
This review was written by Colin Clark.
Posted by ColinsPRW at 13:17:00