AFI are a band who have seen multiple sound changes throughout their fantastic 30 year career. Admittedly I haven't listened to much of their output since Decemberunderground (Interscope Records, 2006) so I was certainly interested to hear their latest outing. 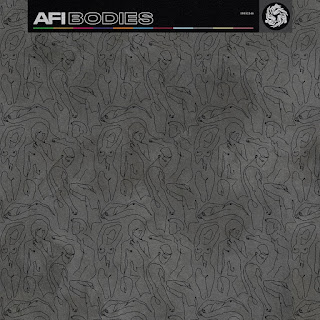 The opening track Twisted Tongues surprised me as it dropped straight in. I’m used to a drawn out intro track like previous records, but there’s none of that here. The song is fairly upbeat with the standard air of AFI melancholy we’ve come to know and love. There’s something about Davey’s voice that’s just very theatrical and always carries a lot of emotion. The chorus hook ‘You talk in twisted tongues’ is delivered in typical Havok style. The drums are lively and tight, accentuating the tricky basslines, particularly in the bridge section. The song trails out with an almost Sing The Sorrow-esque (Dreamworks, 2003) guitar riff, swirling off into the distance.

This drops effortlessly into track 2, Far Too Near, which is an instant hook mainly because of the tempo and plucky lead riff. There’s some fantastic, twangy rhythm guitar just set down in the mix which provides a great backing to the lead riff. Once again, the drums are tight and snappy leaving space for bass player Hunter Burgan to explore some cheeky bass lines. In opposition to the rest of the song so far, the vocals in the bridge are brought super close, as if Davey was sitting next to you. This is a welcome transition providing an excellent build up to the last chorus. The excellent bass playing continues leading into Dulceria, opening with a real groove as the drums stomp on behind. The lack of guitars throughout the first verse is a welcome change and allows the lyrics to really be heard. We know AFI don’t follow any kind of convention and this is the perfect example. A complete departure from the punchiness of the opening two tracks, venturing towards a new-wave inspired sound.

On Your Back returns to the upbeat pop-rock style. Up to this point there are a number of electronic/orchestral elements but nothing as prominent as the piano accompaniment here. While the tempo is fairly the high, the single keyed notes just bring that down and add another melancholic layer. Once again this song feels very reminiscent of the lighter side to Decemberunderground. It’s as if the floodgates are open in regard to electronic/synthy additions, as Escape From Los Angeles is driven by an electro bass line, with a variety of synth layers and effects throughout. The drums, whilst still real (I believe), have also been given a more electro treatment, so much so that when the vocals drop out it drifts into straight up Synthwave.

I imagine the previous song would be a hate it or love it amongst AFI fans both old and new. As a fan of their older material, Begging For Trouble is exactly what I wanted to hear. The absence of guitars to begin with leaves the drums and bass providing a superb backing to the fairly unaffected vocals. It’s in these types of AFI songs that Davey seems in his element with catchy vocal melodies from the off, keeping it simple throughout.

Back From The Flesh is another complete u-turn in sound. Opening with a haunting choir-like vocal set on a backdrop on pulsating synths. I think I heard some birds chirping off to the one side also. (Anyone else hear that?!) The tempo is slow and drifty, brooding slowly until the almost orchestral chorus comes in. In the second verse there’s an addition of a clean guitar, playing minor melodies, sounding like they’re lifted from a horror video game (Silent Hill anyone?). Looking Tragic takes another turn, the stop-start guitar riff sounding poppy and fresh. A chorus line of ‘Everyone’s looking tragic/Looking for the new panic’ is begging to be sung aloud by teenagers.

Death Of The Party opens up with a plinky lead synth line on top of the drums and bass. It’s almost a straight mix of the older punky AFI sound with the newer, synth lead AFI of more recent records. Every instrument in this song is perfectly syncopated that it starts to sound less like a band and more a solo artist with a backing track, which isn’t necessarily a bad thing. Once again though, it is encouraging to hear No Eyes opening with a straight up guitar riff. In my opinion previous AFI albums have always been very top heavy, in that the second half is generally weaker than the first. This is different here though, No Eyes easily becoming my favourite track from the record. There’s great guitar work throughout, but guitarist Jade Puget really shines here with many layers of interesting lead lines.

The final track of the record, Tied To A Tree is a dramatic closing number. Opening with a simple acoustic guitar and piano line, with haunting vocals across the top. The chorus is a huge contrast when it drops with massive snare hits and heavy bass. As mentioned previously, AFI have always been very theatrical and this finale sums that up completely – a choral main vocal backed by pounding drums and a variety of electronic sounds. To end, it sounds as if Davey has been dropped underwater as his vocals drifts away.

Bodies may not be for the older AFI fans, used to the raw and spooky sounds, but there’s certainly a lot of great moments throughout this record. Whilst the guitar work has always been excellent in any AFI record, it almost takes a backseat here allowing the bass and the synth parts to take more of the centre stage which I found very interesting. I wonder if Jade Puget plays a lot of the synth too? Or he’s doing some crazy shit with his guitar! It may not be a record I return to, but it’s great to know AFI are still writing and recording at the highest level. Maybe one day we’ll be treated to an EP of 1995 era sounding AFI to keep us older fans involved.
You can stream and download Bodies in all the usual places and like AFI on Facebook here.
This review was written by John O'Hare.
Posted by ColinsPRW at 12:20:00