One of the very best things that has happened in the past eighteen months is the apparent re-emergence of ska punk. A huge part of this has involved California’s Bad Time Records who have released amazing records from Kill Lincoln, We Are The Union, Best Of The Worst, Joystick and more, as well as working on the amazing Ska Against Racism compilation with the legendary Asian Man Records. Bad Time Records work hard in showcasing new bands and proving that the ska punk scene is more than just the big three from the 90s. In June they announced a new split series which will feature a legendary band and a newer one. When I first saw this I thought this was a fantastic idea as the legendary band will grab the attention and will, in theory, get the listener to also check out the new band. The split series is titled Wavebreaker and the first release features a song each from Less Than Jake and Kill Lincoln. What an amazing combination of upbeat and energetic ska punk bands! I couldn’t wait to listen to this. 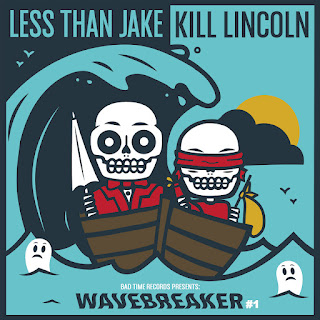 Gainesville legends Less Than Jake start the split with their track Need Some Shaking. What really struck me about the track on my first listen was the high tempo that kicks the song off. The song really has an old school Less Than Jake style to it but bass player Roger’s slick production also manages to keep the track sounding like it would fit nicely on the band’s newest full length, Silver Linings. In my opinion, LTJ are at their best when co-vocalists Chris and Roger share singing duties on their songs. On Need Some Shaking Chris does a magnificent job on the high tempo verses and Roger’s choruses will get a whole load of people singing along. The track is about not becoming stale and predictable and taking chances in your life. In all honesty, I really enjoyed Silver Linings but I’m not quite sure why they didn’t include this song on the album as, for me, it’s one of the best songs the band have released in a while.

Kill Lincoln’s effort for Making Waves is titled Going Under. I’ve become a big Kill Lincoln fan over the past year, following the release of Can’t Complain, and am itching to see them live. For me, they write songs that are begging to be played live to a room packed with people, skanking themselves into an energetic frenzy. Hopefully I can be a part of this at Fest in October. Something that really attracted me to Kill Lincoln was the energy their horn section adds to their songs so I was very pleased to hear them open the track. From there we move to a more stripped back sounding verse. It feels a bit weird to call it stripped back as there is a lot going on but there’s a lot of subtlety to it that creates a really interesting sound. The sound of the song does become fuller during the chorus and after the quieter sections it really stands out. Going Under is about struggling with your mental health and wondering how much more you can take. It’s always important to talk about mental health so I thought it was great for Kill Lincoln to do so on such a high profile release.

As I mentioned in the introduction, Wavebreaker is the first in a series of split releases from Bad Time Records. If this first release is anything to go by, we’re in for some absolute treats. Nothing has been announced (at the time of writing this) about what other combinations are in the works but I’m very excited to find out.
Stream and download Wavebreaker #1 on Bandcamp here.
Like Less Than Jake on Facebook here and like Kill Lincoln on Facebook here.
This review was written by Colin Clark.
Posted by ColinsPRW at 11:46:00