Madam Fatale are a three piece band from Sydney, Australia. I first came across them thanks to Punk Rock Radar on Instagram (I seriously recommend following that page) and I stuck them on a playlist of bands to check out. When they came on I was instantly impressed with their old school Green Day-esque style of punk rock and they quickly found their way on to my review pile. In February, they released their debut album Tyler Moes. I was impressed with the fact that they decided on a twelve track album for their debut release rather than an EP. This, to me, shows a lot of ambition. Is it good though? Yes, that’s why I’m reviewing it. But what do I think is good about it? Read on to find out. 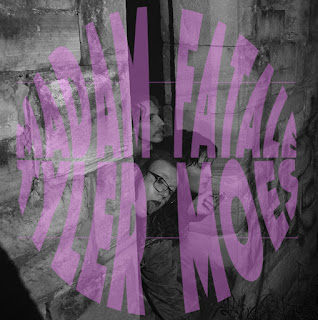 Tyler Moes begins with Are You Bored? Madam Fatale kick the album off with a track about being the second child and getting the feeling that you don’t belong. From the opening vocals you can hear the Green Day comparison I made in the introduction but, aside from the vocals, musically this almost feels more like Billie Joe Armstrong fronting an indie band and it works fantastically. The second song, Church Street, is the track that really made Madam Fatale stand out for me. The opening guitars have a great pop punk sound that really gives you a feeling of what’s about to come. It’s a mid-tempo and melodic song about an acquaintance of the band that only brings bad times to all they meet and wanting to get away from them. This is an extremely catchy song that quickly finds a home in your head. Given that the third track, Girl Of A Thousand Names, is less than two minutes long I initially expected to the song to be a speedy number. It does pick up the pace, but it’s not the blistering punk bullet that I expected. It actually starts quite slowly before getting into a steady pace for the majority of the song. Its high point come when we hit the line “she’s the girl of a thousand names.”

Screen Gun Girl starts off in a solemn fashion. It’s a break up song, with the band’s lead singer Luke Bindoff realising the mistakes they made that ultimately ended the relationship and wishing they could reconcile. The song shifts melodies during its second half. The second half feels like it could be a big sing-along at a live gig. I was a bit surprised that they didn’t make more use of potential gang vocals but I guess, given the nature of the song, it would feel a bit out of place. The fifth song, Out Of My Mind, is another stand out track on Tyler Moes. There is that great, bratty pop punk style that made us fall in love with the genre many, many years ago. There is an immediate sing-along quality to Out Of My Mind that will draw people in and the theme of the song will be relatable to many of us. It’s about falling for someone and convincing yourself that they feel the same even when they possibly don’t. Bad Mistake brings us to the halfway point of the album. This song is about living life whilst constantly getting things wrong. In reality, this should be a really sad song but there is a joy in this song. I guess that it is cathartic for Luke to sing about this, perhaps getting a feeling of frustration off of their chest. I can see this being a fan favourite for the band.

The second half of Tyler Moes sees Madam Fatale take things in a much different direction. Parramatta Girls has more of a rock ‘n’ roll/rockabilly style to it that adds some freshness to the album. As the song progresses there is a moment where things get a bit darker but, for the most part, the track sticks to that rockabilly style. The simple chorus is one that will get stuck in your head for days and days. Toothpick is a slower and more emotional sounding track. The opening verses feature these cool jangly emo guitar tones before the chorus jumps into a more traditional pop punk style. The song looks at the loss of a friend and struggling to deal with that. It’s a much sadder song than anything else on the album so far, so you can understand the slower style that’s going on. I Want My Mummy Back is another slow and sad song. I’m sure you’ve guessed from the song’s title that it’s about wanting your mum to come back. Despite not having a lot of different lyrics, the track is over four minutes long. There is perhaps an argument that the song doesn’t need to be as long as it is but I kind of feel like the repetitive nature of the track adds a lot more emotion and sadness which is portrayed throughout.

The tenth track continues the slower style that Madam Fatale have adopted over the last few tracks. It’s a five minute long, fuzzy, shoegaze style. Musically the song is extremely haunting with Luke’s vocals really shining throughout. The subtleness of the guitar, bass and drums really add to the song. Josh Bishop’s drums are absolutely fantastic and do a brilliant job of not only giving the song a strong spine but also building things up for Luke’s voice to get a bit more intense. The penultimate song is titled Longlands Road. Beginning with just guitar and vocals (something I always enjoy), Josh tells a tale of leaving home. The full band comes in soon enough and really fleshes out the song but I was slightly disappointed this didn’t really increase the tempo of the song. I felt like it could really explode into life for a great sing-along as it’s another song that I’m sure so many people listening to the album will relate too. The final song on Tyler Moes is Besiege Me. This song was originally released as a single by the band in March of 2020. Besiege Me is an acoustic song that also includes some strings. I loved the addition of the strings – they give the song so much extra depth. Perhaps fittingly, this is a sad break up song to finish the album off. The stripped back sound really adds to the emotion of the entire song. Lyrically, it’s quite simple. This will really add to the emotional output of the song as it will hit more people immediately. A great way to finish the album.

I’m consistently coming across fantastic Australian bands and Madam Fatale are certainly another to add to the list. They have quite a unique sound that could see them fit under a few punk and indie umbrellas. This could see them get a big fanbase extremely quickly into their career and I suspect (if the world has finally been fixed by then) to see their name on festival line ups in the UK and Europe over the next few years.
Stream and download Tyler Moes on Bandcamp here.
Lke Madam Fatale on Facebook here.
This review was written by Colin Clark.
Posted by ColinsPRW at 12:12:00