It seems like a while since I’ve banged on about a great Canadian band. On this occasion it’s Rest Easy who are a four piece who reside in Vancouver and feature members of Daggermouth and Shook Ones. In February, the band released their debut EP titled Sick Day on Mutant League Records. It is four songs of high octane punk rock with gravelly voiced vocals and massive, intense sing-alongs. The first time I heard them I was hooked and looked forward to giving the band a proper listen. 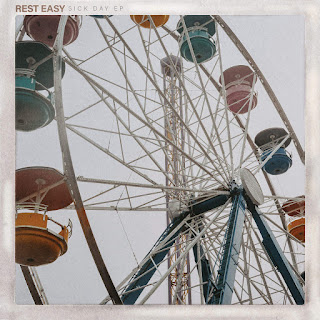 Sick Day begins with Get Busy Dyin’. The track ensures the EP gets off to a ferocious start. After a quick build, the vocals explode out of the speakers. It took approximately nine seconds to go from calm to fully pumped up and I loved that. This is the type of song that will have kids going crazy in a pit. After that frantic beginning, Rest Easy switch to a more melodic approach that makes you feel like the song will build to a big finale but instead leads nicely into the second song Headaches. The track again starts quickly, it hits you like a brick to the face but in the best possible way. (That’s a terrible metaphor, I don’t think there is a good way for a brick to hit you in the face). Much like Get Busy Dyin’, the song feels like it’s in two parts, that big start before then slowing down for a more melodic finish. This finish demands a massive sing-along from a live crowd – it’s just wonderful.

Bad Idea is the title of the third song on Sick Day. Unlike the first two songs, Bad Idea starts in a more melodic way which eases the listener into a song in a much gentler fashion. I think that because of this slower start the track feels so much more emotional than the previous two tracks. This adds a great extra string to the Rest Easy bow. I really enjoyed how the band use multiple vocalists throughout the track, cleverly switching between trading lines, harmonies and big gang vocals – there is so much going on throughout. The final track is the EP’s title track Sick Days. This was the first Rest Easy song I heard and I absolutely fell head over heels for it. On that first listen, the lyric “it’s okay not to be okay” really caught my attention. I’m always drawn to a track that talks about mental health like this, it’s important to be reminded of things like this. Sick Day takes you on a series of highs and lows with some brilliant changes in tempo and melody that keep you guessing throughout. It is such a big way to finish this brilliant debut from Rest Easy.

Obviously, given the members other bands, Rest Easy is a band of real pedigree. I was hooked the first time I listened to Sick Day. I’m happy that I was able to listen to the EP before I discovered the band’s history as I got to hear it without any preconceived expectations and was blown away. I’m sure fans of Daggermouth and Shook Ones will love this release. I’m already desperate for them to make their way to the UK for some shows as soon as possible.
Stream and download Sick Day on Bandcamp here.
Like Rest Easy on Facebook here.
This review was written by Colin Clark.
Posted by ColinsPRW at 13:25:00