The Ship Thieves have had quite the metamorphosis over time; beginning as an alt-country/rock side project, switching to a full band with some Georgia Satellites-esque Southern twang, before finally heading straight into a full punk rock charge with their 2016 release No Anchor. Comprised of Hot Water Music’s Chris Wollard, ex-Quit guitarist Addison Burns, former Samiam bassist Chad Darby and Enablers’ drummer Bobby Brown, it was arguably the moment that a lot of people had been waiting for. While the previous releases were great in their own right, it’s pretty much an ineluctable fact that Chris Wollard is a punk rock songwriting dynamo, with his smoky, gnarled vocal delivery serving as the foundation for the rest of the band to tear into another batch of simply excellent songs. With this in mind, it’s safe to say that Irruption picks up where No Anchor began, bursting at the seams with crunching guitars, gruff but harmonised vocals and interlocking melodic hooks that remind of Sugar or later period Leatherface. 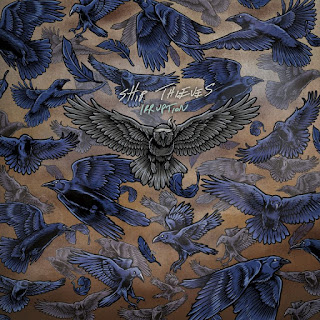 Openers ‘The Embers Of Enlightenment’ and ‘Race To Oblivion’ practically jump off the record player, with the forceful rhythm section providing the foundation for Wollard’s slippery, arresting lead guitar that always strikes the balance between raw emotion and precision. It’s an often abused trope that punk rockers can’t play their instruments, but Ship Thieves are just one of thousands of examples to consign that misconception to the scrapheap; the band exhibit tight, controlled power throughout while never seeming mechanical.‘Ghost Town’ features a wistful searching chorus that kicks right in the heart while the pummelling ‘Tangled Net’ might even be the album’s highlight, with an extended lyrical coda that has Wollard howling “in isolation” over and over again. Given that huge swathes of us have spent nearly a year locked in our homes at the time of writing, the song bites particularly hard.

‘Hercules Stomp’ puts Addison Burns on the microphone, and his higher pitched but yearning vocal delivery completely fits the track’s gleaming hooks. It seems that this album has more and more of Burns trading vocals with Wollard as well as providing excellent backing, and it’s a brilliant addition to the Ship Thieves’ palate. It’s interesting to note how Wollard functioned as the higher, slightly less raspy singer in Hot Water Music, and with Irruption, Burns takes on this role with aplomb. ‘Access Denied’ reminds of Cherry Knowle-era Leatherface, with wiry single-note hooks dotted in amongst slabs of twisting riffs.‘(I Don’t Wanna) Face The Dog’ is one of the most gutsy, aggressive songs on the album, with Wollard and Burns’ call-and-response vocal lines bolstered by a furious Government Issue-esque descending riff, while ‘He Lost His Head’ and its minor key riffing gives way to an absolutely ripping guitar solo that blows back your hair. ‘Lurking Strain’ closes out the record with a sense of uncertainty and desperation, which couldn’t have been more fitting given the climate in which it was released. Burns and Wollard take it in turns to sing, with the former in especially good form, delivering a performance that will send shivers down your spine. Lots of bands would be hard pressed to have one song of this quality on a record, but the Ship Thieves have spoiled us with an entire album’s worth.

When No Anchor arrived in 2016, I remember reading an interview with Wollard shortly after where he noted that Ship Thieves were already working on the next album. Although it’s been a long five years, I’m happy to say definitively that Irruption is an even better record than its predecessor; it adds new elements to the Ship Thieves’ heady brew while keeping their signature mix of melody and sonic heft. It’s a powerful, hard-charging, yet tender and earnest record that is delivered with complete conviction. Who wouldn’t want more music from a band that just keep moving from strength to strength like the seasoned punk legends they are? Miss this at your peril.
Available wherever you stream or download music.
Like Ship Thieves on Facebook here.
This review was written by Omar Ramlugon.
Posted by ColinsPRW at 12:20:00