Canada’s Trashed Ambulance have been together in one form or another since 2014 and the three piece have become known for their snotty vocalled melodic skate punk. In January they released a brand new EP titled Leapfrog on Thousand Island Records. 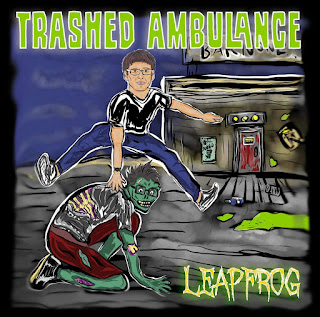 The first of the three songs on Leapfrog is titled On The Mend. The song starts with a slow build featuring some distinctive vocals that pull you in alongside a simple melody. This eases you in to the whole EP brilliantly and will also get you singing along. There’s a great sense of urgency in the song that keeps you listening and I particularly enjoyed the guitar solo that leads towards the final chorus of the track. What a great start. Next is the EP’s title track, Leapfrog. This is a more emotional song dedicated to a lost friend of the band. The band turn down the snotty style of their vocals and there are some No Use For A Name vibes in the song, particularly with some soaring harmonies. The buzzing guitar riff gives the song more of a pop punk sound that makes it super accessible from the start. The tempo of the vocals gives it plenty of energy and the shift in melody for the second half of the track for a repetitive and building chorus is a thing of beauty. The gang vocals give so much to the song’s finale. I loved this song. Last up is Delinquent. Trashed Ambulance return to their debauchery ways with this song about petty crimes and always getting away with it. This is a fast and fun skate punk song that will get a crowd singing along with big smiles on their faces. This is Trashed Ambulance at their raucous best. I have this image of the band playing this song live in my head and there being a massive stage invasion for the song with a massive gang vocal choir. It would be glorious.

This is a short but fun EP from Trashed Ambulance. I’m hoping that it will lead on to a future full length from the band as it really whet my appetite for more new tracks from the band. This is exactly how I want to hear my skate punk.
Stream and download Leapfrog on Bandcamp here.
Like Trashed Ambulance on Facebook here.
This review was written by Colin Clark.
Posted by ColinsPRW at 12:16:00