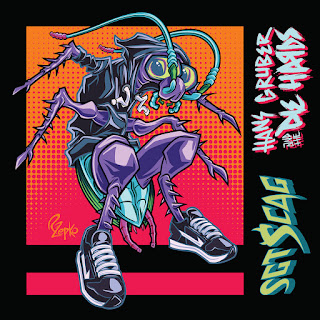 Sgt. Scag (as they are often known) were actually an active band in the North East of America in the late nineties. They were known for their fun and unpredictable live shows. Like many bands from the era, they split in the earlier 2000s but have played a couple of reunion shows in recent years as well as releasing some new singles. Their appearance on this split is a great way to introduce themselves to the new era of ska punk fans. Sgt. Scag’s song on the split is titled Cultination. This is a great introduction to the band for anyone, like me, who is listening to them for the first time. It begins with quite a lengthy brass-fuelled introduction before lead singer Steve’s soulful vocals come in. The opening verse has a great call and response section between Steve and the rest of the band that really hooked me in. This is all played at a nice, mid-tempo pace before the band speed things up for the chorus. So much goes on in this song with changes in tempo and melody but the band seamlessly blend it together so it never feels stop/start. As the song finishes there are some great gang vocals and harmonies and ensure the song ends with a bang. The track is about the Internet influencing children to become mindless robots and how that’s a bad thing.

The first of Hans Gruber And The Die Hards’ songs is titled You’re Being Watched. The Texan outfit are one of the more unique and creative bands to come out of the USA ska scene. The track is about the paranoid feeling of being watched and trying to convince people that you’re not going crazy. The song starts with a very traditional ska punk style. The saxophone playing gets the song off to a fun start before the vocals come in and the song goes off in a completely different style. Vocally you would probably find more similar bands in the crust punk world, with some venomous singing going on. There is a slight change again for what I guess is the chorus, where a vocal that sounds like MC Bat Commander from The Aquabats come in. So much is going on and I love it. Hans Gruber’s second track is named Medical Advice. The track is largely instrumental except with occasional lines being shouted over the top. The lyrics touch upon the medical advice that has been given to the world during the past year such as staying at home, wearing masks and avoiding seeing vulnerable loved ones. There are some moments of anger and moments of sarcasm in these lines, they create quite an interesting dynamic and often make you think. This is such a skankable song and has a really catchy tune that will quickly earn a place in your head.

I really enjoyed this split. It features some old and new school style ska punk so it has something for everybody and is well worth checking out. It’s less than 8 minutes long and is a lot of fun.
Stream and download the split on Bandcamp here or here.
Like Sgt. Scagnetti on Facebook here and like Hans Gruber And The Die Hards here.
This review was written by Colin Clark.
Posted by ColinsPRW at 12:31:00