Album Review: Funny Feeling by Out Of Love

Alternative music folk were making a lot of fuss about UK punk rockers Out Of Love before they had even released their debut EP last year. The four track I Am Not Me really showed a lot of what the band were all about – catchy punk rock songs that look at life for someone reaching their 30s and all of the trials, tribulation and stress that can come from that. On April 16th the band will release their second EP Funny Feeling on Venn Records. Interestingly this was the first time that the band had been in a studio to record music as their first EP was made in their practice space. I was keen to hear how the band has progressed in the past year. 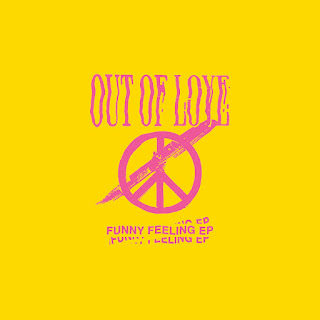 The first track on the EP is titled Play Pretend. If this is your first time listening to Out Of Love then Play Pretend is a great introduction to the band. It starts with a brief audio clip about letting go of your feelings and not bottling things up before launching into a catchy, yet energetic, introduction. When it’s time for lead singer Jack Rogers to come in he quickly makes his way through the first verse before we get to the huge chorus. This is such a great method of getting you invested into the song. It’s about someone having a self-destructive personality but trying to find a way of doing better. This is followed up by Wishlist. Wishlist wastes no time in getting started, continuing the up tempo start of the EP. From the beginning, the song is a big sing-along with some great gang vocals right at the start of the track. If you listen to the guitars underneath the vocals, they create this wonderful, fuzzy sound that gives Out Of Love this magnificent sound that you don’t hear from a lot of punk bands. This really allowed the band to stand out amongst many of their contemporaries. The song is about calling out the people in your life who lie about their accomplishments to try and make you feel bad.

The third song, Hello Trouble, slows things down a little bit. This gives the listener a moment to catch their breath. The track feels like the more radio-friendly accessible track that will hopefully attract music fans where punk isn’t necessarily their favourite genre of music. There’s a bit of an indie rock feel to the song, it might just be me but I’m kind of reminded of Feeder here. There are moments of snarl that appear in Jack’s vocals that do however give the song a bit of edge. Hello Trouble is about learning from your past mistakes and attempting to grow as a person. The penultimate song is titled Dog Daze. Here we see a poppier side of Out Of Love as well as a happier side. As I’m writing this I’m sitting at my desk with some beautiful sunshine coming through the window and it’s putting me in a good mood. The song is about the unconditional love between a pet and its owner. I can’t lie, it also makes me a bit sad, as due to the COVID pandemic that’s taken over our lives in the past year, I haven’t been able to go and visit my dog as she lives with my mum. I know that when I do get the chance that to visit, the unconditional love that Mindy has for me will still be there. Dogs are the best. The fifth and final track on Funny Feeling is named See Right Thru. Here we have a song that looks at seeing past the way someone presents themselves and accepting them for who they actually are. The track manages to jump around with different sounds throughout its duration, somehow managing to squeeze everything that Out Of Love does so well into a mixer and coming out with gold.

This is a second incredible EP from Out Of Love. It’s mad to me that a band can release two fantastic EPs before they’ve even played a live show but I guess that’s the world we currently live in. I cannot wait for that debut gig to be announced, I really hope that I can be there as I believe it will be a special moment that attendees will be talking about for years to come. Out Of Love are going to be massive so get on the train now and enjoy the ride.
Pre-order Funny Feeling on Bandcamp here.
Like Out Of Love on Facebook here.
This review was written by Colin Clark.
Posted by ColinsPRW at 11:53:00