Album Review: You're So Cool by Family Dinner (by Lara Roberts)

Praise the powers that be for Instagram, or I may never have come across Family Dinner. After first hearing the song You’re So Cool, I was instantly hooked and wanted to go back for seconds. Luckily for me I didn’t have long to wait, as the Long Beach five-piece released their four-track EP, You’re So Cool, in February. 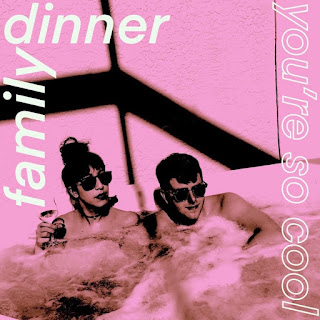 The EP starts off with the title track You’re So Cool, inspired by the 1993 Tarantino flick True Romance. The lyrics really capture what it feels like to get wrapped up in a relationship or situation that’s quickly getting out of control – the excitement, the admiration, and the willingness to throw rational thought out of the car window as you’re speeding through LA. It’s almost like you’re caught up in a different reality, and the dreamy, fuzzy, musical backdrop along with Natalie’s soaring vocals only adds to that feeling. We’ve all felt it, and that’s what makes this song so relatable.

Eyes feels like a follow-up to the first track, telling the story of when the initial excitement of a new relationship starts to wear off, but you’re finding yourself wanting to stay, always going back to that same situation. I found myself in the song, just like I did when listening to You’re So Cool. We get served up some delicious grungy drums and fuzzy guitars, with a side dish of 90s vibes. Note: After reading an interview with the band, I found out that this song was actually inspired by Natalie and Michael’s pet cats – and that’s purr-etty adorable.

We’re treated to another film-inspired track with Mahogany, written from the perspective of character Leon Kaufman, a worn-down photographer pushed to the point of murder, in the film Midnight Meat Train. This serves as a catchy, indie-punk tune with melodic vocals and tight drums. It’s one you can see yourself dancing to at that house party you’re longing to attend.

Our last course is Song 4 (Bloom), a catchy tune to take us through to the end. Straight off, there’s a bouncy melody that you will find yourself singing along with, leading to more fuzzy noise, tasty reverb and indie-pop vocals. In contrast to the music, the lyrics are more personal, documenting the struggles of self-acceptance and trying to claw yourself out of a dark place. I think this is something that we can all relate to, living in these strange, unusual, and often bleak times. There is a feeling of reassurance in the lyrics, reassurance that there is a light at the end of all of this – a sweet aftertaste to be left with at the end of a delicious EP.

Family Dinner bring that familiar feeling of 90s alternative rock back, and season it with an indie-pop, punk rock twist. You’ll love them if you like Hole, Milk Teeth, Somerset Thrower, Nirvana, Silverchair or Rival Schools.


Stream and download You’re So Cool on Bandcamp here.
Like Family Dinner on Facebook here.
This review was written by Lara Roberts.
Posted by ColinsPRW at 11:47:00