Animal Byproducts are a Manchester-based power pop meets folk punk foursome who describe themselves as ‘placid pals peddling patriarchy-poking park punk’ – and I just had to quote that for its excellent alliteration. At the beginning of February the band released a brand new EP titled Attempts At Understanding and I immediately knew this was something I wanted to review. 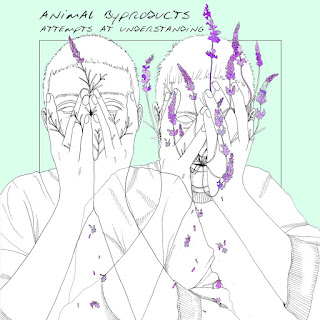 The first of four tracks on Attempts At Understanding is titled Bin Day and it opens with a wonderful crescendo of brass instruments and gentle guitar strumming. Before too long, the vocals come in with the wise words ‘Please don’t forget that it’s your bin day’. I can’t say that I recall ever listening to any other song that reminds me to put the bins out – and I was literally singing this to myself the other day before putting the bin out – so Animal Byproducts definitely get points for originality here. Of course, the song is not strictly just about your household rubbish, it’s about much more than that. Racists? Homophobes? People that say ‘It wasn’t like this back in my day’? They can all get in the bin. Next up is There Are Dozens Of Us! and the band don’t waste any time in getting going with this track. It’s upbeat and catchy from the outset with a superb chorus that unashamedly denies gender roles and stereotypes (‘Do I undermine your solid gender roles? Or are we all just assortments of holes?’) complete with some simply delightful power pop style backing harmonies in the second verse and a trumpet solo later on. It’s hard to pick but this might be my favourite of the four songs on the EP.

Obscene is the name of the third track on Attempts At Understanding and it opens with a melodic guitar riff that will have you bopping your head along in no time at all. When the drums come in the beat is more firmly set and it carries the song nicely through the first verse – which gave me real Chas Palmer-Williams (of Lightyear, but I mean his solo stuff more so) vibes, by the way – and into an epic sounding second verse. The trumpet really is the star of the show in this song and, as someone who is more traditionally a fan of banjo or harmonica in folk punk, it really makes me excited to listen to more tunes with trumpet parts that aren’t so obviously placed as in, for example, ska punk – if that makes any sense. The last song on the EP is Tavistock Square. Another track that doesn’t hang around, this song ensures that Attempts At Understanding ends with an energetic burst. At first I thought the lyrics were quite erratic, with talk of Gandhi, Alan Turing and the bombing of Hiroshima all in a single verse, but I’ve since read about Tavistock Square (in Bloomsbury, London) on Wikipedia and the lyrics make a whole lot more sense! The song looks at all the memories that can become assigned to and associated with a certain place, as well as reflecting on the peace that can be found in a specific location that you yourself hold fond memories of. ‘So the next time you see me in Tavistock Square, Please help me look for the peace that I found there.’

If you’re not already familiar with Animal Byproducts but like bands such as ONSIND and Toodles & The Hectic Pity then you definitely need to check out this EP.

You can stream and download Attempts At Understanding on Bandcamp and like Animal Byproducts on Facebook.
This review was written by Emma Prew.
Posted by Emma Prew at 12:19:00