If you’ve been following our CPRW Records releases closely you hopefully should have already heard of Burning Nickels. Burning Nickels are a three piece band from Alberta, Canada, who play melodic pop punk. Since 2018 the band have been consistently releasing new songs on High End Denim records. On March the 2nd they release their newest EP Cobwebs. We were lucky enough to get an early listen. 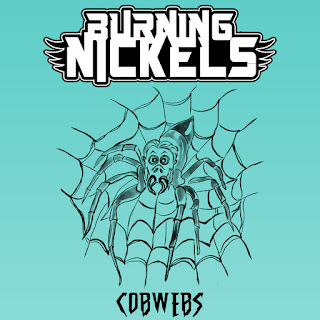 The four track EP opens with the title track, Cobwebs. Burning Nickels were kind enough to send us a super early version of the track to use on our Hidden Gems 2 compilation that we released in January. This is a updated version of the track. It’s a upbeat piece of melodic pop punk in a similar vein to bands such as No Use For A Name and Bracket. On my first listen of the track what really stands out is the flow of vocals during the verse alongside a truly impressive guitar part. The track is about feeling depressed but gradually realising things can get better. The second track is Sentiment which is a Trashed Ambulance cover. Musically the song sounds smoother than the original but Alex Goldfarb of Debt Neglector’s guest vocals add the gruffness you hear in Trashed Ambulance’s version. The song is about dealing with mental health issues and questioning why you are going through these struggles. I really like the imagery that the audio clip at the end of the song presents. Have a listen to find out why I think it’s so smart.

The UK’s Sam Russo makes a guest appearance on the third song, Bootstraps. This song is perhaps the most varied song on the EP so far. The track combines the poppiest of pop punk alongside some heavier skate punk moments as well as Russo breaking your heart as only he can. Bootstraps is about the ending of a relationship and coming to terms with everything that’s happened along with worrying how much more anguish you can take emotionally. The final track on the EP is titled Summer Boner. This song is a retrospective song that also has a bit of a silly side. It’s about looking back on a past summer romance and realising that you had stronger feelings than your first thought. This is one of those great songs that’s fantastic at painting an image with its lyrics. It really allows the listener to visualise the story of the song in their heads. Imagery is such a important part of songwriting and Burning Nickels do such a good job here. There are also some very juvenile lyrics that did make me smile, as I am still a child at heart.

Burning Nickels are one of the most fun bands I’ve discovered over the past year but they are also very capable of writing some serious songs that listeners will really relate to and hopefully get a feeling of catharsis from. It’s clear that the band aren’t the type to sit for too long and I’m already looking forward to what they do next.
Pre-order Cobwebs on Bandcamp here.
Like Burning Nickels on Facebook here.
This review was written by Colin Clark.
Posted by ColinsPRW at 12:23:00