Biitchseat are a four-piece indie punk band from Cleveland, Ohio, who I recently discovered when scouting out tracks to add to my ever growing new[ish] playlist, EMPOWERMENT – a compilation of angry, uplifting and empowering tunes from bands that have female and non-binary members. At the beginning of March, Biitchseat released a new four track EP on Refresh Records titled I’ll Become Kind. The band describe the EP as being ‘a reclamation of self-determination, and a resolution to treat yourself kindly’. I don’t know about you, but that definitely sounds like something I can get on board with. I really love the artwork as well (which is by Violet Hill). 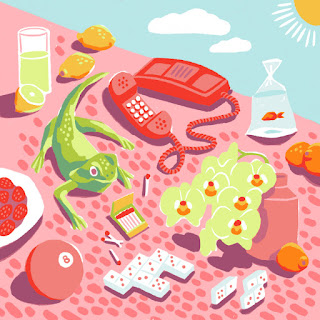 I’ll Become Kind opens with Anti-Depressed, which was also the first track I heard from Biitchseat in general – as a single and out of the context of this EP. It’s certainly a great introduction to the band. Starting slowly and relatively quietly with just guitar and vocals, it’s not long before the volume is amped up and the rest of the band come in. The melodies are certainly pleasing to the ear but it’s vocalist Talor Smith’s voice that immediately grabbed my attention and lured me in to the song and the band. The lines ‘And you don’t have to wait for fall, And you don’t have to be scared at all.’ feel incredibly uplifting and empowering. The wonderfully titled Bad Vibes Hoarder is up next. From the outset the track has an almost dream-like and carefree feel with an enticing melody that seems to go up and down and then up and down again. Overall it’s a slower paced track than the first but is no less rousing, particularly around the three minute mark where an instrumental interlude leads into a killer final chorus – ‘…I don’t need to be a bad vibes hoarder, Shouldn’t I, shouldn’t I want more?’. There’s already no shortage of positive messages to be taken from this EP and we’re only on track two.

Wasting My Own Time is the name of the third song on I’ll Become Kind. Its warm, melodic guitar part and firm drums instantly put a smile on my face – I don’t know why but it just felt comforting, like the sun shining through a window on a Spring day. Evolving from gently strummed chords to some huge-sounding, slightly fuzzy tones, the guitars seem to really drive the song forward as Talor reflects on the feelings of needing to forgive yourself for ‘wasting your own time’. I can definitely relate – and I’m sure you can too – to the sense of always feeling like you need to be productive with every moment of free time you have. Similar to Bad Vibes Hoarder, there is a lengthy instrumental section towards the end of Wasting My Own Time but, instead of leading into another chorus, it gently fades out in an almost cinematic fashion. The last track on the EP is called Good Enough. It’s the perfect culmination of the themes that have already been reflected upon earlier on the EP, as well as featuring the EP’s title in its lyrics. Being kind doesn’t just mean treating others well, you should be kind to yourself as well – something I’m sure we all need reminding of every now and then. ‘Tell me how to become better, And I’ll become kind, And I’ll become kind, Please tell me how to become kinder, To myself, It’s about time, It’s about time.’

It’s been a rough week (month, year…), but songs like these are certainly helping to make me feel better. I like sad songs, and sometimes listening to them does make me happy or bring a feeling of catharsis, yet it’s whole different feeling to just listen to such positive and relatable tracks such as those on I’ll Become Kind. Go and check it out, it might just put a big smile on your face too.
You can stream and download I’ll Become Kind on Bandcamp and like Biitchseat on Facebook.
This review was written by Emma Prew.
Posted by Emma Prew at 12:27:00