Second Player Score are a three piece band from Vancouver, WA. Describing themselves as a #nerdcore band, they have a sound very reminiscent of the 90s skate punk scene. The band have become known for wonderfully catchy songs as well as having plenty of hooks. In February, the band released their newest EP – Four D: The Winter Suite. This is my first exposure to the band and I found a new favourite. 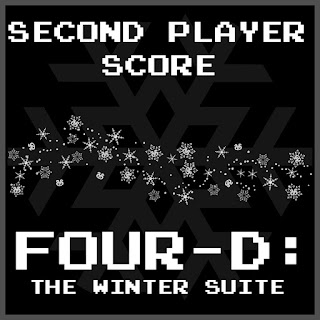 The four track EP begins with the song The Flow. It starts in a great up-tempo fashion with some siren-like guitars and some heavy drums. When the vocals begin, they add a great melody to the song that really pulls you in. I really enjoyed the contrast with the wordy verses and the more simplistic chorus; this really gives the song a distinct feel. In perhaps an homage to Bad Religion, the chorus has some great harmonies. When I first heard the second song, That Escalated Quickly, I was quickly reminded of Swedish skate punk legends Millencolin. Musically the song has a punchy rhythm, with the vocals doing most of the work with the melody. Second Player Score add in a great guitar solo midway through the track which then leads into a building verse and final chorus that brings the song to a great conclusion. The song is about how things can quickly go horribly wrong just when you think things are going okay for you.

Winner Takes It All sees the band go down more of a ska sound which I really enjoyed. This is such a positive and uplifting song about not giving up and going for your dreams. Lyrically the song is extremely simple. This simplicity makes the song so much more impactful, which I guess is what you want from a song like this. CPRW Records has just released a compilation packed with positive and uplifting songs, I’m sad that I hadn’t heard this song earlier as it would have been perfect for it. The fourth and final song is titled Dark Night Of The Soul. Second Player Score slow things down on this track. This gives the song that wonderful epic feeling that all final songs should have. Given the song’s title and the heavier nature of the sound, it would be fair to say that I was surprised to find the song so uplifting. The track is about holding on to hope no matter how difficult things may seem. Starting out slowly, the song builds and builds as it progresses towards its first chorus that will hopefully make anyone not feeling good feel at least a little better.

Four D: The Winter Suite is such an impressive release. It’s quite throwback in sound but doesn’t sound dated. The second half of the EP in particular was sublime. It’s such a positive ending and something that is important for people to hear. If you’re a fan of bands like Millencolin, Bad Religion or anything released by Epitaph twenty years ago, I’m sure you’ll love this.
Stream and download Four D: The Winter Suite on Bandcamp here.
Like Second Player Score on Facebook here.
This review was written by Colin Clark.
Posted by ColinsPRW at 12:25:00