Denver, Colorado’s Slap Happy are a three piece band who formed in 2018. After releasing a demo and single, the band finally released their first full length in February. Titled Prophylactic Shock, it features nine songs of melodic pop punk squeezed into twenty-eight minutes. Colorado seems to be one of those states that consistently births great melodic punk bands, this made me very keen to check out Slap Happy. 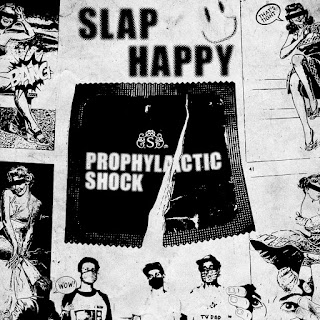 Prophylactic Shock begins with the song Freak Out. Starting out with some bass before a drum roll and buzzing guitar come in, the track builds towards the vocals. When they come in you’re ready to sing along with the band. The opening line of “sometimes I get paranoid and freak out” is as cathartic as it gets. The two verses lead really well into the simple, effective sing-along choruses. Between the two choruses there’s a nice break down that will give a crowd a short rest before finishing with a final big sing-along. Next is Same Old. Same Old was one of the standout tracks for me when I first listened to Prophylactic Shock. The song continues the theme of mental health, in particular questioning why things aren’t changing and you still don’t feel right. The almost four and a half minute run time of the song gives the band room to play around with the tempo of the song. They take a moment to really slow things down towards the song’s end before building up to one last chorus, which is completed with some superb harmonies. From the longest song on the album, we move on to the shortest. Kingsley Manor picks up the pace slightly for a song about moving on from your old punk house before it becomes too much for you mentally. The higher tempo gives the album a great boost of energy which I really enjoyed. This is another stand out song from the album – it’s short, sweet and got me pumped up.

The Sun starts with a rumbling bass line accompanied by some vocals before the full band comes in and the lines are repeated. There’s a sharpness to the way the vocals are delivered which really grabs the attention. This is more of an angry song about global warming and needing to act now despite governments seemingly not wanting to admit that the world is in a lot of trouble. Much like how it’s important that bands tackle mental health in their music, I think it’s also important for bands to use their platform to speak out about causes like this more and more. The fifth song, Slacker, sees the beginning of a sequence of songs that get a bit heavier. There’s a sludgier sound to the band which is quite the contrast to what we’ve heard so far. Slacker is about feeling like you’re going nowhere in your life and struggling to find motivation to do anything productive. Something we’ve all related to at some point I’m sure. Dejected is a slower, grunge-like song. The bass line gives the song a really solid spine throughout and allows the guitar to do some interesting things with the reverb. Dejected is about feeling disappointed with where your life is heading and not getting any luck. This lack of luck leaves you struggling mentally as well as causing frustration and anger. The tone of the song really helps set the mood for the overall theme.

The seventh song, Dissent, continues the heavier sound but has more of a 80s hardcore feeling to it. The guitars throughout the song really wail and bring the energy up. The vocals turn into a snarling growl that are quite difficult to make out at times. Something Slap Happy seem to enjoy doing in their songs is slow breakdowns that build towards the song’s finale. We get another one on Dissent and it may be the best one of the album, it’s my favourite anyway. The penultimate song is titled Cement Foot. Slap Happy switch to more of an indie punk sound, showing such versatility to their music. The guitars jangle in the introduction with the vocals giving the track a choppy melody that really hooks you in. A highlight is the chorus where Slap Happy treats the listener to some Beach Boy style harmonies that add a sweet extra layer to the song. Cement Foot is one of the more uplifting and positive songs on the album. It’s about struggling mentally but standing up and saying you won’t be defeated. The ninth and final song on Prophylactic Shock is These Times. These Times bookends the album nicely by reverting back to the melodic pop punk that began Prophylactic Shock. It’s about something a lot of us in our thirties worry about, our friends moving on and wondering what the next step in your life is. I really like the positivity that comes out of the song, particularly the chorus, which feels like the singer is taking a giant leap into the unknown and looking forward to it.

Slap Happy showcase a lot of variety on this album and have managed to put together a collection of songs that should cater for fans of many different punk sounds. The band touch on a lot of subject that are important to me and many other folk in the punk scene and that’s always pleasing to hear. Well done Slap Happy on a very promising debut album.
Stream and download Prophylactic Shock on Bandcamp here.
Like Slap Happy on Facebook here.
This review was written by Colin Clark.
Posted by ColinsPRW at 12:18:00