Album Review: Algorithm & Blues by The Good The Bad And The Zugly (by Lee Morton)

Norwegian punks The Good the Bad and the Zugly have made an early claim for album of the year, and we’re not even through January (at the time of writing this). Their fourth album, “Algorithm & Blues”, doesn’t let up for one second, packed with so many stone-cold bangers that it’s nearly impossible to pick a favourite.

With their last album, “Misanthropical House”, winning a Norwegian Grammy it’s fair to say that the bar has been set high for its follow up but GBZ are not known for running away from a bar, in fact the only thing they are better at than raising the bar would be drinking one dry. 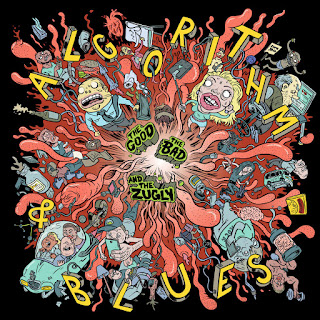 Before I dive in to the review, let’s get the lazy comparison out of the way first. Whilst GBZ share a lead singer Ivar Nikolaisen with metallers Kvelertak, they are no clone. Although I can hear some cross-over between them but, if you think of them like Norse gods striding the Norwegian music scene, Kvelertak would be the strong, heroic Thor and GBZ would be the cunning, mischievous Loki and I know who you would have more fun with.

And it’s fun all the way, as an extended classic rock style riff opens first track “Welcome To The Great Outdoors”. With a hint of Pinball Wizard in the intro, the song quickly mutates into a scuzzy, garage punk romp. It’s GBZ firing on all cylinders and the perfect re-introduction to the band as it stomps along casually throwing melodies at your ears and catchy singalongs.

Featuring a more hardcore vocal style, “Fake Noose” follows and despite its heaviness it still retains infectious melodies, riffs galore and gang vocals to shout yourself hoarse to. But it’s track three where they really take off as a twinkling bittersweet intro, reminiscent of Billy Talent to my ears at least, really showcases everything the band are about. Possibly one of their most accessible songs, “Staying With The Trouble” is almost epic at points with guitar licks that would make Slash proud and the greasy rock sound nicely offset against a beautiful choir. At the time of writing this, it’s my favourite song on the album although that will have changed again by the time I finish.

After the brief spoken word interlude of “Follow Your Dreams”, things get fast and nasty with the one-minute blitzkrieg of “Kings Of Inconvenience” that has all the subtlety of a brick through a window and causes just as much damage.

If you’ve ever listened to GBZ before you’ll know that they don’t take themselves too seriously and that comes across over the next couple of tracks. Take “The Man Behind The (Oxygen) Mask” for example, a song about sleep apnoea of all things. Tongue wedged firmly in cheek, this breakneck track details the struggle of middle-aged men with another massive chorus line of gang vocals screaming the line “breathe in, breathe out, easy for you to say, I need a fucking machine to get me through the day”.

“Fuck Life…But How To Live It?” follows and is all about the struggle of balancing real-life jobs with playing in a band, working hard during the week and raising hell at weekends. Guitars chug away until a mid-point change in tempo and the call and response refrain of “Friday night, 50 euros in my pocket”, which will sound massive in the live environment.

Another track about band life but this time pointing the finger at other bands is up next in “Corporate Rock”. Guitars buzz away as singer Ivar takes potshots at bands with big marketing machines behind them, while they stay resolutely DIY. It hits the mark brilliantly.

Things take a turn to the political on the self-explanatory “The Kids Are Alt-Right”, which takes aim at the worrying rise of white supremacy. More great guitar work powers this along but it’s the haunting sad realism to the line “I’ve seen the truth, there is a darkness spreading in the heart of our youth” that really sticks with you.

Continuing the righteous anger whilst doffing their cap to NWA, “Fuck The Police” is a storm of riffs whilst the constant chanting of “fuck the police” ups the menace and is sure to incite mass shout backs when played live.

“Kisteglad” provides an interlude before the final track “Requiem”, a scuzzy, punk banger that pours yet more riffs into the melting pot before fading out as ominous church bells chime in the background, providing a gloriously fitting finale to the album.

If it’s not already evident after reading this, I loved this album. I had high hopes based on previous releases and this doesn’t disappoint, in fact I’d have to say that it’s their most coherent and comprehensive album yet. Now, if they could just drag their arses to the UK so I can hear it live.

Like The Good The Bad And The Zugly here.

This review was written by Lee Morton.
Posted by ColinsPRW at 16:53:00

Email ThisBlogThis!Share to TwitterShare to FacebookShare to Pinterest
Labels: Album Review, Skate Punk, The Good The Bad And The Zugly