The last few records Anti-Flag have released have, for the most part, been packed with political songs that seek to surpass the time in which they were written. Rather than detailing the specifics of current atrocities, which could risk dating a particular album, AF prefer to go after the ideas and challenges the Left faces over longer periods. So when it was announced they were going all in on a record attacking the awful Trump administration, I was super excited to see what they had in store – and I wasn't disappointed by "2020 Vision". 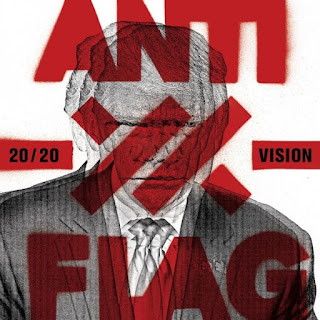 "2020 Vision" opens with a Trump quote: "In the good old days, this doesn't happen because they used to treat them very, very rough and when they protested once, they would not do it again so easily." It's so awful and abhorrent that it takes a while to really pick apart everything about this quote that makes my blood boil: it's suggesting hurting and suppressing protesters exercising their free speech is a good thing; and it manages to dismiss civil rights, women's rights and gay rights movements in the same few hateful words. I had no idea Trump had even said this – I guess it had just got lost in the rest of the mountain of garbage that constantly pours out of this man's face-hole. The effect of these first 10 seconds is incredible: basically, if you weren't angry enough to enjoy this song before, you are now.

The first song sets the tone for the record: it's about living through the Trump administration, having to impotently watch climate change legislation being torn to shreds and racist immigration laws be proudly implemented in their place. It sets out exactly what this record is against in black and white, so the rest of the songs have their starting mark. A line which stood out to me was: "The same masters who made us their fucking slaves, Are now our saviours, I'm so sick of needing to be saved". And it's a perfect hit – Trump preaching that he can fix the problems he and his ilk caused in the first place. It's not just the lyrics that hit hard here either – the guitars do as well, and the effect of everything added together makes me super pumped up to listen to the rest of the album.

After that absolute juggernaut of a song, they follow up with "It Went Off Like A Bomb", which has a more classic Anti-Flag sound: mad bass line straight out of the gate, catchy counter melody in the guitar, Justin's vocal giving a sweet main melody and the drums driving the energy in the song. It sounds like it has been ripped straight from "For Blood And Empire" and polished up for a 2020 release. I think this one would fit perfectly in a live set amongst the old classics. The lyrics call out the dog-whistling for which right-wing politicians are famous, disguising their calls to arms for white supremacists and other extremists to vote for them… or to do something more reckless. The title track "2020 Vision" preaches a message of hope going forward to the next US election, carrying a reminder to me to keep fighting and to change people's perspectives one by one. Sound-wise it leans more heavily into pop punk, focusing more on being an anthem with a big chorus, keeping it simple with not many chords.

The next track follows the last in terms of sound, but lyrically is an attack on the white Christian nationalists, calling them out for exactly what they are: terrorists, fascists and white supremacists. "We All Know Who You Are" goes along perfectly with the video, showing (if it weren't already obvious) the people at whom the lyrics are taking aim. This song was the first single off the record and, to me, it absolutely was the right choice: it sets up exactly what Anti-Flag are against. It was a clear message that if you are any of these things described by this song, you are not welcome at an Anti-Flag show. It's also easy enough to listen to as a first Anti-Flag song, as it has a nice organ to tease you in before the big punk rock chords, and like the previous song there's a big chorus and great hooks.

This is followed up by "Don't Let The Bastards Get You Down". While at first it seems to go for the same anthem-y sound as the previous two songs, it's more like a chant or protest song about not letting the terrible state of the world dishearten you from going out and being the change you want to see. This one couples up with "Unbreakable", which was the third single. I really didn't like this song as single, but it really fits in now. The record adds a lot of context to this song's message of hope and resistance, and its lyrics really connected with my personal experiences with mental health – it reminds me of being picked up by my friends and like minded people when I feel terrible about the world. Like so many of "2020 Vision's" choruses, it will get stuck in your head – the lead guitar in this song is especially guilty of this!

Track 7, "The Disease", has the best chorus on the record, it absolutely got my blood pumping. I felt so cool listening to this waiting for my trains, whispering to myself "We are the disease". Chris #2 shouting "We reject you!" is the best line here, and is the perfect lead into the solo. I really like how this song blends the more Pop Anti-Flag sound with the more Punk Rock old sound for a great balance between the two.

I really love track 7 but, oh man, track 8 "A Nation Sleeps" is my favourite song on the album. It begins with calming violins, followed by loud, aggressive guitar and vocals. This aggressions is reflected in the first lyric perfectly – "One nation sleeps, Another stays hungry and doesn't dare to dream..." – which sends chills up my spine. The song is attacking ignorance of and inaction on what is going on in foreign territories, it makes me want to take action, to do more than just commute-work-commute-sleep! Sound-wise it's close to a hardcore punk song, you can hear the anger dripping from every line, but I think it still really fits the record.

"You Make Me Sick" is the most simple song lyrically. It's a hate song about Trump and the people behind him and how they make us all feel when they do the awful shit they do. Being from the UK myself, a lot of our politicians came to mind when I was listening to this. Each syllable of this one spits venom and I love this perfect fuck you sing-along song.

"Un-American" is a slower more acoustic song – it reminds me a lot of "One Trillion Dollars", but it's in a minor key, which gives it a massive Billy Bragg vibe while still having a catchy chorus. This is really present in the lyrics, it confronts the harsh realities of the contradictions inherent in the American Dream in 2020. The first verse is about a woman experiencing the glass ceiling in the workplace, while the second focuses on a man left behind in his town when the factory that he is working at shuts – after he was promised otherwise by a politician on a campaign trail. I felt the tears welling up in my eye during this verse as the parallels to Brexit and what people were promised in the UK during 2016 fit this song perfectly. I can see this happening to a lot of people in my country in the next few years, when they finally start to see the lies they have been sold.

The final song is "Resistance Frequencies" which kind of feels showtune-esque with the use of trumpets in the melody, and final upbeat catchy chorus feeling like a ray of sunlight after the dark clouds of the track before. Once again, the lyrics are perfectly written: "It's not a dying planet that's made you less free, is it the brown child that we've caged public". This conveys everything you need to say about scapegoating in the current climate, and it sounds sweet on this song. With this final song, we're left with a message that another world is possible if we only stand up to this one.

This record is a great start to 2020, providing anthems of hope to get stuck in your head and powerful songs of anger to make you get off your ass to go and be the change you want to see. Anti-Flag have created another record which I will be revisiting for years to come!

This review was written by Dan Kilvert.
Posted by ColinsPRW at 12:24:00