Sometimes when bands announce gigs, much as I want to see them, I pause and think "when this comes around, am I really going to fancy it?". On paper, a Tuesday night, in the first week of February, at a venue that's north of the river was one of these gigs that might make me think twice. But when that band is Anti-Flag, no way was that ever going to cross my mind with this gig.

I get to the venue when Maid of Ace are already on stage. A four piece from Hastings and my first thought is that they're very tight, as you might expect from a band that's made up of four siblings, but by the time I've properly got into the venue, got to the bar and then got my spot in the audience sorted, their set is pretty much over. However, they've made enough of an impression for me to make a mental note to check them out online in the next few days.

Next are Canada's The Creepshow. I'll be honest, even though they've been a band for around 15 years, I'm not familiar with them. They're a charismatic blend of psychobilly and horror punk. Not normally my thing, but I love their set. Anyone with that amount on energy that's able to play a double bass above their head is a winner for me. The crowd seem to think so as well – in the end the perfect warm up for Anti-Flag.

Staring down as the backdrop to the stage is the banner of Trump and the cover of the recently released new Anti-Flag album. It's pretty well documented the band have never called out specific politicians in the past, despite their fabulous political, economic and social commentary they've never wanted to define their music in that way. But now they've made an exception. Identifying Trump as such a odious individual and dangerous threat to both the US and the rest of the world that his image forms the artwork on the new album and he's sampled on its opening track. And with the gig falling on the same day as his State of the Union address and his impeachment trial on the verge of collapse, it suddenly seems so much more important and appropriate for Anti-Flag to take this new approach.

And so, we're now ready. Blitzkrieg Bop by The Ramones kicks in and the crowd know the band are about to take the stage. They enter one at at time, all of them dressed as usual in black. All looking so cool.

Whenever a band tour on the back of a new record, I'm always slightly nervous that the new stuff will take too much prominence when really everyone is there to hear them play the classics. But, I've got no such fears following the release of 20/20 Vision a couple of weeks earlier. It's a brilliant album that's been on constant rotation. If they played it from start to finish I wouldn't be unhappy. So perhaps the band know this, as they kick off their set with Christian Nationalist and the crowd love it. It's the latest socio-politically charged anthem and another defining Anti-Flag song. It's only been out a couple of weeks, but the crowd already know it inside as they scream "you're no better than the rest, white neo-christian nationalist!".

What follows is a blistering set. They've released so many albums it must be hard to decide on what to include and what to leave out, but we get loads of classics including The Press Corpse, Turncoat, Trouble Follows Me, 1 Trillion Dollar$ and Fuck Police Brutality as well as the new ones Hate Conquers All and 20/20 Vision. 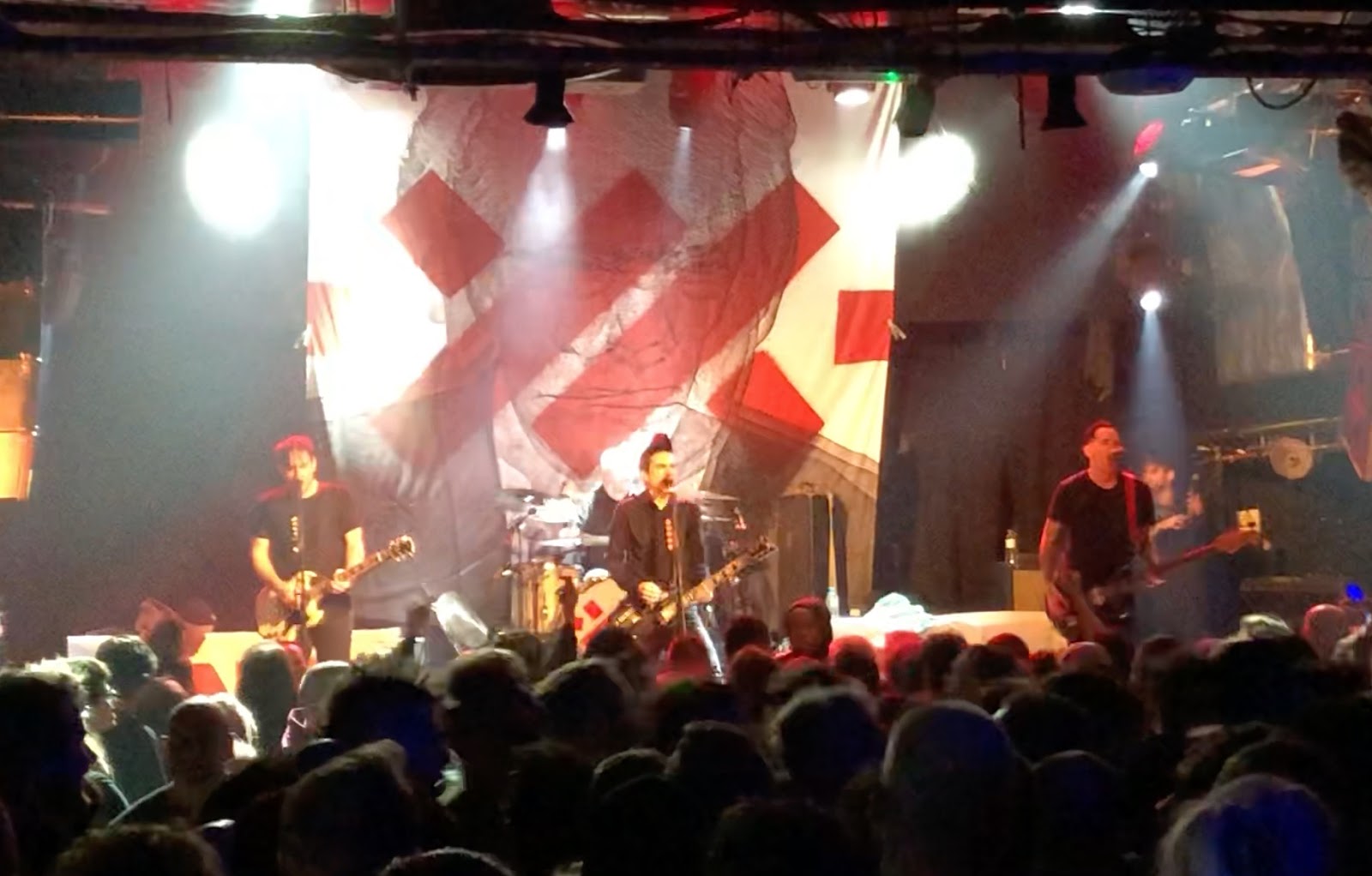 Justin and Chris#2 swap lead vocal duties throughout and, as you'd expect, the band frequently deliver their politically inspired messages in between songs raging against hatred, bigotry, corporate greed and police brutality. At various points we're asked to raise our middle fingers in the air, shake hands with strangers next to us and create a circle pit in what is actually a relatively small venue.

The whole set and performance is obviously well rehearsed. Chris#2 is up on, and then leaping off, speakers before throwing the microphone stand complete with loudhailer still attached over his shoulder without looking, safe in the knowledge he's done it so many times someone will be behind him to catch it.

As expected, they reappear and dutifully give us what we want, blasting out four more songs complete with a mini stage invasion with The Homeless Gospel Choir (why weren't they publicised as playing beforehand?) and the familiar finish of Pat's drum kit being dragged into the audience before Chris#2 also ends up on the floor with us.

The end of the night is signalled by the band urging us and the world to generally fight for all that is good before Whitney Houston's I Will Always Love You blasts out over the PA and we step out into the cold night. Well worth a trip north of the river!

This gig review was written Chris Bishton.
Posted by ColinsPRW at 17:18:00