Album Review: Here Lies Ordinary by Laughing In The Face Of (by Omar Ramlugon)

Birmingham’s Laughing In The Face Of have been hacking away in the punk game since 2002, with prior LPs Technically, It’s Not Our Fault and The Lubrication Of Social Anxiety being released in 2008 and 2011 respectively. Aside from a natty line in Zappa-esque song titles, the foursome also know their way around pin-sharp shred-tinged punk in the vein of A Wilhelm Scream and it’s very much the order of the day on their most recent release Here Lies Ordinary. 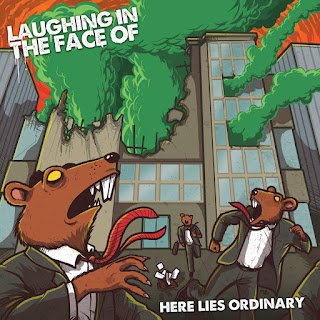 Opener ‘The Regression Session’ followed by ‘Projectile Dysfunction’ are best viewed as two parts of a whole, as they seem to blend directly into one another with little breath in between. Not that it’s a bad thing, as the former gently fades into view before piling in with hyperactive riffs, while the second track even throws in a Tool-esque stomp in between the speed-of-light thrashing.

Lyrically, the band zeroes in on the pain of the human condition and the struggle inherent in finding one’s purpose in life, set at odds with the often unappealing nature of corporate work. ‘Bullshit With A Smile’ is particularly cutting in this regard, which lends the hooky, melodic guitars even more power and focus. While ‘Running With Coffee’, for its part, incorporates some killer hammer-on/pull-off sections in amongst the snarky tone of the song.

There’s a sense of irrepressible energy throughout the LP and, while the songs largely have a fairly similar sound, it gives the album a distinct sonic landscape. Furthermore, in amongst the often mournful lyrics are flashes of humour; the It’s Always Sunny In Philadelphia sample at the end of ‘Modus Operandi’ is particularly well placed. The musicianship displayed is consistently excellent, with an absolutely watertight and dazzling rhythm section that is more than a match for the fretboard pyrotechnics on display, as well as an ear for harmony and an often disarmingly sweet vocal delivery in amongst the gang shouts. At times the riffing rivals heavy metal in its low end muscle, but without any of that genre’s at times portentous and po-faced tendencies.

This is a rager of an album with good hearted sentiments at the core of it all, perhaps best exemplified by the line in ‘From The Ground Up’ – “(Be real and) try not to fuck eachother up / That’s it, goodbye!” If you’re a fan of any of the bands mentioned in this review, like anything resembling punk or, perhaps just fancy being made to realise you’re actually rubbish at guitar as in my case, then pick this up. More please.

This review was written by Omar Ramlugon.
Posted by ColinsPRW at 12:21:00

Email ThisBlogThis!Share to TwitterShare to FacebookShare to Pinterest
Labels: Album Review, Laughing In The Face Of, Lockjaw Records, Skate Punk