Album Review: The Aging Punk by The Reaganomics

I could make this review really short by saying that The Aging Punk by The Reaganomics is on Red Scare Industries and so therefore it is brilliant. Red Scare only release brilliant albums. That's a fact. I'm sure most people reading this have come to expect more from a CPRW review though and I'm more than happy to expand the review to explain exactly why The Aging Punk is brilliant and not just because it is on Red Scare.

The Reaganomics are a four piece band from Joilet, Illinois, who formed in 2008. They previously released two other albums – Get Lost, Stay Lost (2009) and Lower The Bar (2011) – on Red Scare. They left eight years between their last album and this new one. I'm not sure what they were up to but when The Aging Punk came out it proved to be well worth the wait. 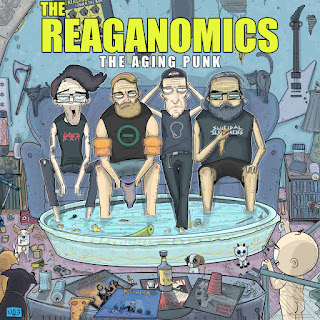 The Aging Punk begins with The Four Cliches. It's a fitting first song for the band’s first release in eight years. It's about wanting to write a good punk song and hitting all the right cliches. If you're experiencing The Reaganomics for the first time, I think the best way to describe them is by saying they play rambunctious pop punk music. It's full of catchy hooks but there's also a wild intensity that pumps energy into the music. On Dear Jaymez that wild intensity continues with a heavy drum beat and guitar riff to open the song. The song kind of reminded me of some old school MxPx with a harder punk sound along with the melodic vocals. This is fitting as the song seems to be about still listening to and taking inspiration from music of the past. The third song, Dunzo, starts with some hand clapping and an 80s-style hair metal riff before jumping into a fast paced pop punk song. The vocals are delivered at some pace, this really had me invested into the song – I love a rapid fire vocal delivery. It also ensures that a lot gets packed into a song that's less than ninety seconds long. A stand out on the album.

Happy Birthday Jeff was released as a teaser demo before The Aging Punk came out. This song would have fit so brilliantly on a Lookout Records comp back in the 90s. Like The Mr T Experience? You'll love this. It's about going to prison for breaking a law that you don't agree with, for example using force to protect your house from a burglar. Obviously, this is a serious thing, but The Reaganomics manage to put a humorous spin on things during the song. It's much more fun than the topic really has any right to be. Mountains is another stand out song on The Aging Punk. Wasting no time at all in getting started, that word ‘rambunctious’ springs back to mind. There's a joyfulness about the song that I quickly got on board with. It feels like a party song, where you have your arm around the person next to you and shout every word back at the band. It's about finding somewhere to escape the stress and pressure of life and feeling better because of it. The sixth track is named Worth A Damn. It's another big ol' sing-along from the outset – so it's a lot of fun. The song is about realising that you've not always been the best you can be and trying to change people's opinions of you. It's a mid-tempo paced track with plenty of moments to really engage the listener.

STFU is another track that the band released as an early demo in the build up to The Aging Punk. The track begins in an explosive manor with a heavy rock influenced intro. This sound is continued throughout the song with the vocals providing much of the melody. STFU is about living with social anxiety and wanting to get the better of it. Meth Gator is a song about getting addicted to crystal meth and eventually dying because of it. They use getting attacked by an alligator and dragged down to the bottom of its swamp as a great metaphor for this. This metaphors offers a bit of humour to an otherwise dark song. I always enjoy when bands take a tongue-in-cheek approach to what is a serious subject. It humanises it and makes it more relatable to everyone. Bravo to The Reaganomics for this. Grown Ass Man starts with quite an angry bass line before moving into quite an uplifting song about getting older and being okay with that. This song makes me think of what Pennywise would be like if they had more of a sense of humour and poppier side. The tenth song Don't Be An Asshole reverts back to the 90s Lookout sound. I'm pretty sure the opening melody is borrowed from an old Green Day song. This really helped the song grab my attention so deep into the album. I really loved the message of the song – it's pretty obvious what that is from the song title, not being an asshole. It's a super positive song. I adored the chorus of "just don't be an asshole, you can literally be anything else in the world." It's simple but it's so effective.

Kingmaker shows off the heavier side of The Reaganomics again. Blending metal with melodic skate punk, it really allows the bad to show off their shredding ability. When I'm paying more attention to the song rather than annihilating my air guitar, I discover it's a song that takes aim at the trendy punks who are not genuine and act as if they rule the scene. I dislike folk like this so I really appreciated The Reaganomics writing a song to call them out. The penultimate song is named Summer Maiden. Again channelling their metal head side, the track has an extended introduction that you might expect from the UK heavy metal legends. The summer aspect of the sound comes from the vocals. The music and the vocals really offer quite a contrast but work surprisingly well together. The song is about making the most of your time with friends as it becomes harder as you get older. This is a nice and cheery song that did make me smile. The final song on The Aging Punk is titled Confessions Of A Snowflake Lib-Tard. I'm sure you can work out that this song is a political one and one that targets those humans who believe any old rubbish the media write and have a very dated approach to many scenarios. Sadly I can relate far too well with this song, there are many people like this in the UK as well as the USA. It's a fast paced and urgent song. The pacing of the track really allows the band to share their anger on the subject and it comes across brilliantly. The highlight of the track are the lyrics "I'm pro-choice, I'm anti-asshole." This was the perfect song to finish a fantastic album.

As I said in the introduction, this is brilliant. Red Scare do it again… obviously.

This review was written by Colin Clark.
Posted by ColinsPRW at 17:06:00