I’m about to attempt to do something that I’ve never done before: review an album where I don’t understand any of the words, unless I use Google Translate, because I don’t speak any French beyond ‘bonjour’, ‘je m’appel Emma’, ‘merci’ and ‘au revior’. This is not something that I would dream of attempting, did I not already really like the band in question. I listened to said album on the day of its release and then immediately put it on again because I enjoyed it so much – all despite the language barrier. It also felt pretty appropriate to be listening to a French band on the day the UK left the EU. Fuck Brexit.

Guerilla Poubelle are a punk rock trio from Paris who have toured the world, including playing shows at The Fest, Pouzza Fest, Booze Cruise Festival and Manchester Punk Festival as well as France’s own This Is My Fest (which, I think I’m correct in saying, they have a hand in putting together each year). They are a super hard working band with strong DIY ethics – they even have their own label, Guerilla Asso. Their new album, L’ennui (which translates as ‘Boredom’ by the way, if you also do not speak French but were wondering), was released on the 31st January on said label. Oh, and the legends that are Red Scare Industries are putting it out too! 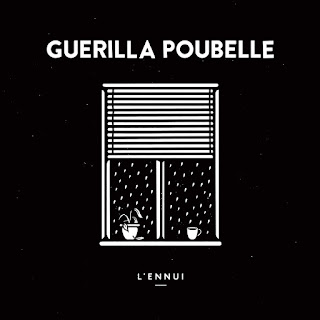 The fact that the album has 13 tracks in a 30 minute run time is a sign that this going to be relentlessly fast-paced. And this theory is proved correct with opening track Les frontières du présent which is loud and fast from the outset. Here Guerilla Poubelle deliver a rousing protest against the world’s borders. The vocals are distinctly gruff and the chorus is a wonderful gang affair – even if I can’t quite sing along myself, yet. Second song, La chute, slows things down a little with chugging guitar and bass parts to open the song. The chorus is a catchy one which works well with the bouncy melody. The pace returns for Qui perd perd which is not far off being a full-on hardcore anthem. I wouldn’t want to be near the pit for this song – because I’m small and would probably get crushed. It’s easy to feel the rage that the band express here through the intensity of their playing and the almost screamed vocals. Unsurprisingly, the song finishes in just over a minute.

Fourth track, Apocalypse 6:12, is probably the song that stood out to me the most on my first listen through, not least because of its dark title. It’s definitely not as ‘hardcore’ as the previous track, instead taking a more mid-tempo path. I really enjoyed the exchanging of vocals between different members of the band for the chorus, something that is mirrored between the bass and guitar melodies as well. The next track, La bataille de Paris, switches in pace throughout. This helps to keep the listener’s attention and keeps you guessing what will happen next. Entre Booba et Balkany is the longest song on L’ennui, at well over 3 minutes long, and it sees Guerilla Poubelle deliver something quite different to everything we’ve heard so far. The song has a slow and extended musical introduction which builds with intensity for half of its duration before bursting to life. The whole song showcases what brilliant musicians Guerilla Poubelle are.

The seventh and eighth tracks on the album, La casse du siècle and L'aigle et la foudre respectively, are both super melodic, mid-tempo tunes. There’s plenty more shout-along-able gang vocal moments, catchy riffs and even some whoa-ohs. I should note that I have used Google Translate and read all of the lyrics for this album, it’s pretty dark stuff but inspirational at the same time, it’s good that Guerilla Poubelle are able to write songs about such important political topics. The volume is amped up once more for Passer l'arme à droite and we have one of the catchiest choruses of the album – ‘Est-ce qu’on passera l’arme à droite ?’ / ‘Will we pass the weapon to the right?’. Catchy but hard-hitting, much like the music itself. Vampire is the name of the tenth song. Opening with a beefy bass line, shortly followed by a steady drumbeat and those gravelly vocals, it’s unusual that the guitar doesn’t come in until just before the chorus. When it does come in however, it sure packs a punch.

La guerre des pauvres is another upbeat ambush of angry punk rock. The track hurtles along at a breakneck pace but towards the end of the song there’s a short breakdown section that allows the listener to take a breath as they nod along to the riffs on offer. At least until the the pace picks up again for the last leg. The penultimate song is titled L'argile. Opening with a heavily distorted bass line and pounding drums, L'argile is probably the slowest song on the album but what it lacks in speed it makes up for with fraught emotion. In less than 2 minutes, however, it’s all over and Guerilla Poubelle ramp things up for their final song, Mare Nostrum. Bringing the album full circle, Mare Nostrum takes on the subject of refugees and freedom of movement. Understandably, it’s another hard-hitting song both musically and lyrically – the chorus being ‘Victimes de survie et d’espoir, Au fond du plus grand cimetière d'Europe’ / ‘Victims of survival and hope, At the bottom of the largest cemetery in Europe’. With plenty of atmospheric building throughout the song, it certainly feels like a huge and poignant way to end the album.

Even before I’d copy and pasted the lyrics from the band’s Bandcamp page into Google Translate, I knew that this was an angry, anti-fascist, pro-equality, political protest album. I’ve seen Guerilla Poubelle live and I know that’s what they’re about. I also don’t have to understand every single lyric to feel the passion and raw energy they put into their music. So, if you too do not speak French, please do not let that stop you from checking out L’ennui and Guerilla Poubelle because I think it’s brilliant.