Album Review: Under Tension by The Drowns (by Chris Bishton)

I first came across Seattle's The Drowns a couple of years ago. I was trying to get hold of a copy of another album, from another band in the US and, in passing, one of the guys mentioned The Drowns. They were about to bring out their debut album and he would be doing some distro, so did I want a copy? I'd never heard them before, but his exact words were "it's damn good," so of course, why not? I took a flyer on it and grabbed a copy. Never a truer word spoken! The Drowns are indeed damn good!

The members of band themselves are no newcomers. Previous bands they've played in include The Briggs, The Shell Corporation and Success. The Drowns’ sound certainly draws on some of these elements – fast, catchy, punk with sing-along anthems sung mostly with a gravelly vocal that I love. 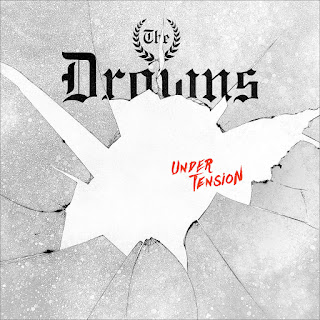 The first track on Under Tension, Black Lung, sets the tone. Street punk, fast guitar and the raspy cry of "yeah! yeah" that then lends itself to a track that will be an instant sing-a-long classic.

This is then followed by a slight shift. Them Rats has the same fast tempo and harmonic vocals, but whilst it is a punk track, it's an oi! infused sound that sits somewhere between Booze & Glory and Rancid. It catches me slightly by surprise, but again it's easy to imagine a hot, sweaty crowd shouting along to this.

Wolves On The Throne then switches to a crisper sound, with a cleaner cut vocal, but which features a "woah-oh-oh" finish.

Hold Fast was a track that was released on the streaming sites before the album itself so I know what I'm getting with this and it comes before One More Pint and Wastin' Time. All are absolute bangers – flashing guitar and harmonies with those raspy, gruff vocals that sounds like a morph between an American-accented Frankie Stubbs and, dare I say it, Lemmy.

In between these tracks are Demons – another that was released online last year – and Cue The Violins. These are more jangly and the vocal shifts in tone again as the band continue to switch up the lead vocalist. They too are fast, but they remind me more of the The Undertones complete with Fergal Sharkey's voice! Less growly than some of the other tracks, but they have the harmonic sound and sing-a-long choruses.

A cover Jimmy Cliff's classic The Harder They Come is given the punk makeover towards the end of the record (and who doesn't love hearing punks covering these sort of tunes?) before the album concludes with The Unknown and Battery Street.

This last song is possibly my favourite. It gives that nod to the Oi!/Rancid sound and parts of it are very stripped down with just a simple drum beat and guitar as the vocals take primary focus. I can imagine the band finishing their gigs with "I know who I am… I know where I'm from" being screamed by everyone in the room as the ultimate "slow it down… thank everyone for coming… build it up to a crescendo" song.

There's a lot of bands from Seattle that I'm loving at the moment – The Subjunctives, Burn Burn Burn, Dead Bars – all of which released killer albums last year. The Drowns are the latest from the city to carry on this trend.

Under Tension is their second album in less than two years and along the way they've released a couple of singles and toured the US, Europe and Japan. No one can accuse them of not working hard. They've already announced they're back in Europe to play the Rebellion, Brakrock and Punk Rock Paradise festivals in the summer. Hopefully they'll add some club gigs in as well. I'll keep my eyes peeled.

Until then, I'll have Under Tension on a pretty constant repeat. It's only mid-January, but I'll call it now – the record will easily be in my top five releases of the year.

This review was written by Chris Bishton.
Posted by ColinsPRW at 12:07:00