The brilliant Avon from my favourite blog Turned Up Jeans & Rolled Up Sleeves is back with another guest gig review.

Not very many people told me to fuck off last time, so I’m back with another guest review for Colin. This time it’s for Make That A Take’s Lethal Lottery gig in Edinburgh on Sunday the 19th of July. 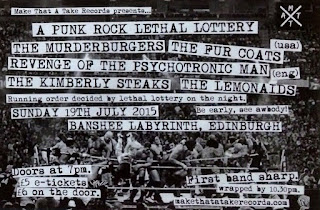 In case you’re not a wrestling fan, Lethal Lottery is when you draw names out of a hat to determine who is fighting who, or in this case, the order in which the bands were playing. Sunday night was also the third night of the recent Murderburgers/Kimberly Steaks tour and seeing them in Scotland is always extra awesome. Unfortunately Revenge of the Psychotronic Man had to pull out of the gig at the last minute so the line-up on the night consisted of the Murderburgers, the Fur Coats (over from the states for a UK tour), the Lemonaids and the Kimberly Steaks.

First up were the Kimberly Steaks. It can be tough being the first band on, especially on a Sunday night gig, but it certainly didn’t stop them playing a great set. Sadly they didn’t play my favourite song by them/of the year so far, but they did play the two other original songs from their latest EP and they also played a couple of new, new songs which sounded fucking great. They tend to just play through their songs with very little chat in between, but to be fair the songs are so great you don’t need anything else.


The second band to be picked was the Murderburgers. They still don’t have a permanent drummer and their regular bassist wasn’t able to make this tour, so it was basically Fraser and two-thirds of the Kimberly Steaks. I don’t think I’ve ever seen a bad performance from the ‘burgers and they didn’t disappoint this time. It being a hometown gig also added to the party atmosphere – it’s hard to pretend to be a rockstar when your pals are in the audience shouting shite at you. I’ve seen them play a few times since they started working on their upcoming album and the new stuff they’re playing sounds better every time I hear it.


On third were the one band I’d never seen before – the Lemonaids. Again, this bands consisted of two thirds of KS (I honestly don’t know how Ross and Tom have the energy) and they were, for me, the highlight of the night. Aesthetically they have everything I love in a band – power stances, matching Hawaiian shirts, beards – and musically they were great. I don’t think they’ve played live yet this year but it certainly didn’t show. Like the others, they played some new stuff but I enjoyed finally hearing all their old stuff live just as much. It’s impossible to be grumpy when listening to them. 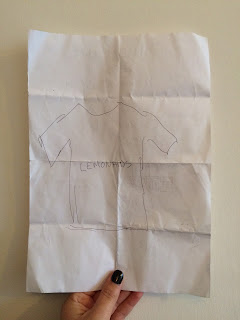 Up last were the Fur Coats. With a different drummer and bassist! Madness! I have a MTAT season ticket and so I got a copy of their new EP but I didn’t know them before that. I’d already seen them on Friday night in Dundee for the launch of said EP and they were great. Their singer has a really distinctive but lovely voice. He doesn’t sing quite as fast as Greig or Fraser (not many do to be fair) but he does chat a little more and they were a great band to end on.


MTAT really are very good at putting on gigs and this was no exception. The Scottish scene is incredibly welcoming and there was a gratifyingly decent amount of women in the audience too. In terms of atmosphere, crowd, energy and music this was the best gig I’ve been to since Masked Intruder in Glasgow in May. It was so good, in fact, that I forgot to take any photos so here instead is a photo of Mikel from the Lemonaids and Greig from KS singing karaoke/showing us their holiday snaps after the gig. 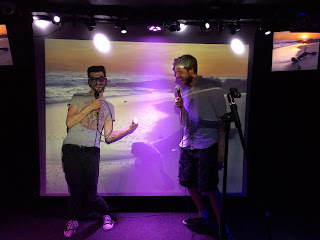