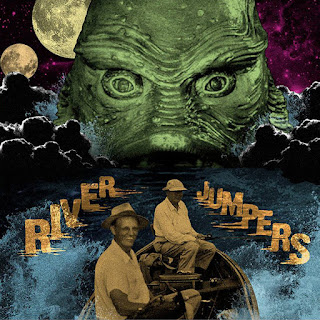 It seems like an eternity ago that Brighton's melodic punks the River Jumpers released their fantastic debut album Chapters. Released in 2012 chapters featured ten brilliant punk rock gems about living in the moment, learning who you are and relationships. After then releasing the excellent song All Our Histories last year the River Jumpers boys finally released a brand new self titled five track EP. Here are my thoughts on it.

The opening track Grays Sports Almanac (1950-2000) starts off very quickly with lead singer Nicholas Davis distinctive vocal showcased straight away. Musically this is as hard as I've ever heard River Jumpers with the drums in particular really driving the song forwards. Midway through the song the music fades out and gives the illusion that the track is done before coming back in with some uplifting lyrics about realising who you are and fighting for what you believe in. The second song, Peaks And Troughs is a typical River Jumpers catchy punk rock jam. If you're not at least humming I can see this track becoming a firm favourite in a River Jumpers live set. I really love the way Davis's sings with a different melody to the music in the opening verse of the next song Rest Un-Assured. There is a great breakdown towards the end of the song where Davis sings the lines "Find What Keeps You Strong, And Try To Fix What's Wrong." Inspiring stuff. The penultimate song National Divide allows bassist Paul Perity to show off some great bass lines to open the song before River Jumpers get angry. I've not heard Nicholas spew venom so much on any River  Jumpers song before. National Divide is obviously a political song bordering on the hardcore punk rock genre. Another song that will go down a storm in a live setting, giving the crowd a chance to get a chaotic circle pit going. The final song Playground Politics is my favourite song on the EP and one of my favourites of the year. It's about being fed up of all the petty arguments and ignorance that still goes on in grown up life, even though you thought that was left behind when you finished school. Musically this song has everything I love in my punk rock songs, fast and interesting beats, it makes me want to dance and sing and it makes you think. Bloody brilliant stuff.

Since River Jumpers released this EP there has been a complete line up change with only lead singer and guitarist Nicholas Davis staying on and the band becoming a five piece rather than a four. For me this was very surprising news as this EP is simply fantastic and I was expecting great things to follow from it. That said I have every faith that the new line up will continue to make River Jumpers get better and better and I'm looking forward to seeing what they do next.