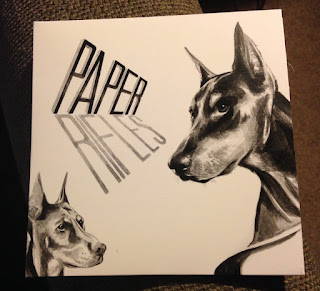 I always love checking out other peoples music collections. I find it quite entertaining looking at what other people like and are listening to and it can be a great way to find new music. Recently I was checking out my new friend Avon's (here's a link to her blog) collection on Bandcamp and looked up an act named Paper Rifles. I clicked play and fell in love instantly. Paper Rifles consists of a man named Jon from Edinburgh who plays acoustic punk rock music. Late last year he released a new EP named Politics. Here is my review.

The opening track on the Politics EP is also named Politics. The strength of Jon's voice is instantly apparent, full of passion and energy. This is exactly how I love my acoustic punk music. It makes me want to sing a-long at the top of my voice. This the sort of song that I imagine would captivate a room full of people at a show. It will get you arm in arm with the people around you and bring strangers together. It is brilliant. The second song on the EP is called The Barricades Built. It starts off with some whoa-oh moments that will instantly grab your attention before we are given a more restrained performance on this song. A little of the passion is taken out and replaced with a little more melody. The verses feel like Paper Rifles is telling us a story before we get to an empowering chorus of "So Stand Up, Bear Your Arms and Bare Your Chest, Bet Your Bottom Dollar That This Life Is A Test For The Next." The next song on Politics is called Cemetery Sea and is a song originally by Jon's former band The Curators. This version of the song starts off with some fast but simple guitar strumming accompanied by Jon's voice and full volume, again full of passion. The vocals also take complete control of the melody of the song at the beginning. This leads into a big finale complete with backing strings. Another song that will get fists in the air and voices loud. Track four is named Made To Break and is a more chilled out song. The first thing about this song that struck me is how accessible the sound is. The punks will love it, the singer songwriter fans will love it, even your mum will love it. The final song on Politics is called Four Hours. I love the variety in styles that Jon shows during the track, starting off and a decent tempo with a bit of passion coming through in his singing before slowing things down slightly in the middle of the track before finally ending with a massive finale.

In a scene where acoustic singer songwriter punks are getting ten a penny Paper Rifles is certainly one of the stand outs. Off of the top of my head I can't think of someone who sings as well as Jon and keeps all of the passion and honesty in his music. Paper Rifles to put it simply is awesome! Thanks Avon.

By his brilliant music here: https://paper-rifles.bandcamp.com
Posted by ColinsPRW at 13:57:00