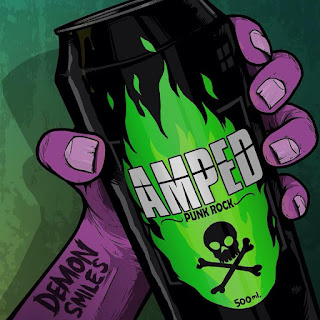 Brighton three piece punk rockers Demon Smiles are a band that I respect a lot. Not only are they an absolutely brilliant band but are also completely wonderful people. They do so much to support the punk rock community by helping their friends bands put out fantastic records and constantly putting on brilliant shows. I think the band faced one of their biggest challenges last year when they had to find a replacement for their original guitarist. Once they had found a excellent replacement they immediately began writing new songs and recorded a brand new release called Amped. Here is my review.

Amped begins in explosive fashion with the song Penny For The Wise. Straight away this song feels harder than any song they've played. Steve's drumming is relentless throughout the song really keeps the tempo going at a great pace and new guitarist Jazz plays some excellent NOFX inspired chords but the true star of the show here is bassist and lead singer Cat. In punk rock it's often accepted that the singer is never really a great singer just the person in the band who happens to have the best voice. Cat is definitely an exception to that rule, she's not only a fantastic singer for a departure of the bands former guitarist and the emotional struggle it caused. Brilliant start to the album. Up next is a track called Impropaghandi. This is a song about feeling unhappy with the scene that you're in, finding others who believe in what you do and starting your own scene. The music is fast and aggressive but Cats voice gives the song some real melody. Another brilliant tune. The third song Fuck You showcases Cats excellent bass playing skills, when you hear it it's hard to believe that she's only been playing for a few years. Fuck You is a fun anthem heading towards the poppier side of punk rock and I imagine is a real crowd pleaser. Everyone loves shouting out "Fuck You!" Miss Me is the name of the fourth track on Amped and also features on Demon Smiles second EP Handcannon. This song whilst still going at a frantic speed (I think Steve has one drumming speed - fast as possible!) feels somewhat more sombre than the earlier songs. The song feels like a perfect closer for a live set so it is surprising to find it placed in the middle of this release. The chorus of "Miss Me When I'm Gone" is likely to be stuck in your head for days. 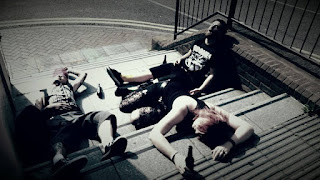 Track number five, We Are The Weirdos starts out with a enjoyable rumbling bass line before Jazz and Steve join in with some super fast skate punk. This song is about the love of punk rock music and embracing being seen as different. I love the lyrics "It Keeps Me Sane, It Keeps Me Whole, I Take This Music Everywhere I Go." Whenever life get's rubbish music always is a big part of making everything seem better. Enemy starts off very quickly with Cat and Jazz trading off lines during the opening with chorus. Cat's pretty girl vocals and Jazz's raspy screams (reminiscent of the Mel Yell) are very contrasting and create an extremely interesting sound. This song is a message to other bands about working together as part of the punk rock community. The tempo change towards the end of the song really adds to the song and will get a whole crowd singing a-long with the band as they sing "I'm Not The Enemy." The penultimate track The Future Is Definitely Over is a reworking of another track from Handcannon. The guitars in this song sound more towards the pop punk sound of Teenage Bottlerocket, a band Demon Smiles are big fans of. It's great to hear a slightly different sound in Demon Smiles music, showing some real versatility. On the original version of this song the vocals are shared between Cat and the bands former guitarist but on this new version Cat takes centre stage, giving the song a more polished and clean feeling. Amped is completed by the song Keys. The intro is great on this song as it builds into the main meat and gravy part of the song. Musically the song has everything, fast skate punk, stripped back sections and even a ska section that I've never heard the band play around with before.
Demon Smiles are one of the best kept secrets in the UKs underground punk scene. Amped is by far the bands strongest release to date and I was already a big fan of Handcannon and debut release Burn It To The Ground. Jazz has taken Demon Smiles up to another very high level and I really can't wait to see where this exceptionally talented trio with such a high work ethic go next. Straight to the very top I suspect.

Now listening to Homecoming (No Use For A Name cover) by The Bouncing Souls
Posted by ColinsPRW at 12:23:00