Album Review: You Do Drugs by Modern Tribes 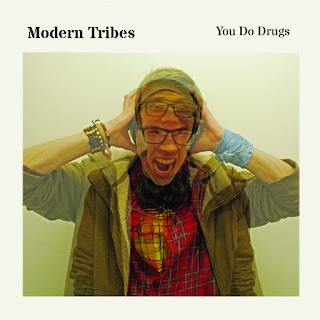 Modern Tribes are a new three piece modern punk/alternative rock band from Oswestry. They have recently released their debut EP titled You Do Drugs. The cover art made me very interested in what the music would sound like. It's some of the trippiest imagery I've ever seen on cover art. I just had to see what Modern Tribes were like.

The opening track is a real foot stomping head banger of a song. Named Cut It Out (Won't Go Back) musically has a real rock and roll feel to it but Eric Evans vocals have a real punk rock rawness to them. Singing only one line (the words from the songs title) there is a brilliant simplicity to the music that will keep your attention and have you singing along in no time. The second song, Annie Adderall feels more restrained musically but the lyrical growl is still there. This track is about a friend who has fallen victim of drug abuse with Evans questioning what are they going to do now? Despite the aggressiveness in the vocals it's another song that is really easy to sing along with. The third song is named When It Burns (You Will See Me Smile) and starts with a nice short building style introduction. I get the feeling that if Modern Tribes would ever go down a pop punk route this would be the outcome. There is a surprising amount of hooks amongst the hard gritty sound. The EP is finished off with a song named Psycho. The band really get to show off their musical chops at the beginning of this song. A nice lengthy intro that again builds brilliant and is very atmospheric. Eric (guitar), Ben (bass) and Tim (drums) really show how competent they are as musicians on this instrumental track with the only words coming from a couple of sound bites.

Modern Tribes are one of the most unique bands I have heard in a while. I was a bit sceptical when I saw the description of the band but the sound really works. It's like nothing I've really heard before but it's not so different that it's off putting. Looking forward to hearing more from these boys.

Now listening to Punk Rock Rick by Going Away Party
Posted by ColinsPRW at 12:14:00