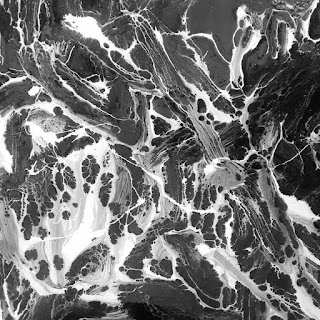 WaLL are a four piece post hardcore band from Cardiff. On July 25th they will be releasing a brand new EP titled Object. They asked me to check it out, so I checked it out.

The first song on Object is named Blue. The track starts off with a noise that sounds like dogs barking before some aggressive vocals come into play. The word aggression is on my mind throughout the song, everything seems to be done with a certain amount of venom, anger and intensity and I'm wondering what's upset these guys so much. But it fires me up as well and I want to lose control while I'm listening to the song. The second song, Wage is a more controlled affair. There is still a certain amount of aggression in the vocals but the whole song feels like the band are holding back. It's good to show variation in the songs though, to be seen as a great band you can't just be a one trick pony. Things are changed up again on Butter, the third song. This feels very much like a experimental song where the band have just got together for a jam and Butter is the result. I really don't know how to describe it, I have no idea what's going on but I just can't stop listening. I suggest you check it out for yourself. The final song Surrender is a bit of an epic. WaLL change things up again, the first half of this six minute journey is so restrained and the lyrics are all done in the style of spoken word. Then when you least expect it the song explodes into life and everything gets loud, fast and angry. Then everything stops and a long period of feedback begins, I sat through this expecting something big to happen but nothing ever did. Felt kind of unnecessary. This shouldn't detract from whats a very listenable EP though. It's quite out there and different but that definitely shouldn't put you off. It's raw and it's passionate and everything that you probably love about punk rock but displayed in a very different way.

Now listening to Clumsy by Spineless Yes Men
Posted by ColinsPRW at 07:48:00