It’s been too long since I’ve reviewed any ska punk. I’ve also been sitting on Kill Lincoln’s new album, Can’t Complain, without reviewing it. Can you guess what’s coming? Here’s my review of the ska punk album Can’t Complain by Kill Lincoln! Can’t Complain was released by the brilliant Bad Time Records back in August. Kill Lincoln as a band have been around for a while now and I have to admit I’d never properly checked them out but I loved the singles they released in the build up to Can’t Complain. 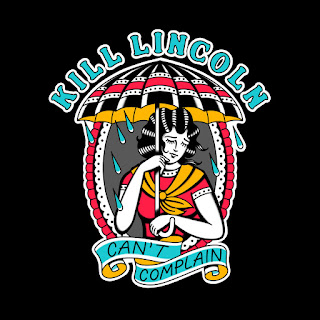 First up on Can’t Complain is Greetings From Inner Space. The track starts with a fading in effect that adds a little bit of tension to what’s coming up next. This wasn’t the blistering ska punk assault that I was expecting to open the album, instead it’s more of a mid-tempo pop punk song featuring punchy horn lines. The song is about growing up and realising that things are getting harder and harder but being thankful of your support system to help you through the tough times. Following this is Used Up. This song featured more of the high energy ska punk that I was expecting from the album. The song starts quickly with Mike Sosinki’s vocals exploding alongside some fast paced upstrokes. The band storm through the opening verse, reaching the chorus in no time at all. Here things are slowed down slightly as the band use the catchy melody to really hook the listener in. From everything I’ve seen and heard, Kill Lincoln are an incredible live band and I can really imagine a room full of people bouncing up and down to this chorus. Used Up finishes with a slow guitar jam that serves as in introduction to the third song, Last Ditch Denial. A trend on this album is going to be really catchy choruses and Last Ditch Denial is no different. This is one that you’ll find yourself singing passionately along with without even realising. That’s the sign of a great song. The track itself is about being at the end of your tether with trying to put on a brave face whilst you’re struggling with your mental health. This will definitely be a song that a lot of people will relate too.

Ignorance Is Bliss is one of the singles I was enjoying before Can’t Complain was released. At just over one and a half minutes long, this is the blisteringly fast ska punk assault that I was waiting to hear. So much happens in this ninety-six seconds. It begins with some shredding guitar before Mike shouts “my head explodes from the way I feel” and we’re really off and running. This may be a niche reference to a lot of people reading this but I was really reminded of my Danish pals Forever Unclean at the beginning of the song. As it progresses, and the ska comes in, I can imagine a massive skank pit going crazy for this song and I want to be a part of it. Who Am I This Time? was a standout track for me when I had my first listen through of Can’t Complain. The song really allows trombone player Yasutake Umemoto and saxophonist Matt Ellis to show off their skills. It’s more of a slower paced song with fantastic horns and punchy vocals. Naturally, when the chorus comes in it’s a massive sing-along. The track is about trying to find an identity in a world of grey areas whilst governments look to play different groups against each other. The sixth track is Confession Obsession which was another favourite of mine when I first listened to the album. This is a high energy song that will continue to get you so amped up. It’s like injecting caffeine straight into your veins. This is the first time on Can’t Complain so far where Kill Lincoln make use of harmonies and gang vocals and this really adds a whole extra layer to their sound that I absolutely adored. Try listening to this song and not finding yourself skanking like a maniac and shouting along at the top of your lungs. The seventh track is named Well Spent; Wasted. This song showcases more of a punk rock side of Kill Lincoln. It reminds me more of a Less Than Jake, punk rock with horns style sound rather than a flat out ska punk style. The drums pound throughout the song, driving the track forward whilst Mike’s vocals are so strained and urgent you can’t ignore them.

Civil Surgery has a fantastic extended introduction that will again have you dancing your socks off. The Kill Lincoln horn section is clearly one of the best in the genre at the moment and everything they do on Can’t Complain is creative and adds so much to the album. Of all the songs on the album, Civil Surgery perhaps takes you on the biggest ride. After the horn lead start we get to a slower paced verse that builds to a skate punk sounding chorus before the delicious horns come in. As we come towards the end of the song there’s a huge breakdown where Kill Lincoln take us on a heavier road which will allow listeners to really release some pent up aggression – this moment was really unexpected but was absolutely fantastic. Up next is Quarantine Dream. This song is about wanting things to be better, whether it’s yourself or the world around you, and realising that you can only do that whilst working together. I’m not certain if song was written before Coronavirus took over the world but it certainly feels more apt than ever. It’s pretty obvious that having a strong community working together is far better than people doing things by or for themselves and I love that Kill Lincoln used this platform to talk about that. The penultimate song is titled Womb Envy and is a Paint It Black cover. Not being familiar with the Paint It Black original of the song I would never have even realised Kill Lincoln were covering it. The band do a fantastic job of making it their own and show that the band can play some high energy ska punk without relying heavily on their horn section. The album finishes with the title track, Can’t Complain. Unsurprisingly the song ensures the album finishes in a high energy manner. It also finishes in a positive manner which I loved. The song is about people who constantly ignore all of the troubles and issues in the world (something we all do sometimes) and encourages people to reach out and help people when they can. You can’t complain if you’re not ready to help make a change yourself.

Kill Lincoln, and their label Bad Time Records, have been at the forefront of the current renewal of interest in ska punk in the USA and so it’s not a great surprise that the band have released one of the best ska albums of the year. If you like ska but are still only listening to Less Than Jake and Reel Big Fish, you need to educate yourself on the next wave of incredible bands coming from the USA and Kill Lincoln are the best place to start.
Stream and download Can’t Complain on Bandcamp here.
Like Kill Lincoln on Facebook here.
This review was written by Colin Clark.
Posted by ColinsPRW at 12:23:00