Stubborn Hearts are a melodic punk duo from Rhode Island, New York. They write relatable songs about subjects such as relationships, anxiety issues and pets, and promise to always put on an energetic live show. Taking influence from bands such as City Mouse, Mobina Galore, The Muffs and Spanish Love Songs, in May they released a seven song EP named Tales From A Red Flag Galaxy. From the fact I’ve chosen to review it, you know I liked it – read on further to find out why. 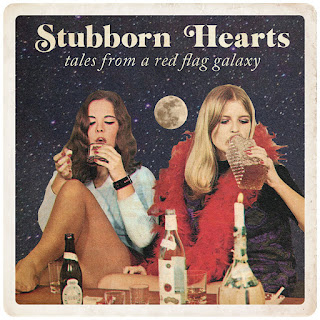 First up is Flux Capacitor and from the start you can hear the Mobina Galore influence. The song begins with just guitar and Jenn Lombari’s vocals. After a while the drums come in to give the song a fuller sound but the song really gets going when Lombari really pushes their vocals towards a more guttural shout. This is when the song really grabbed me. The track is about the end of a relationship and wishing you could go back in time to when things felt better. Up next is Don’t Freak Out. Stubborn Hearts pick the pace up on this song and channel their inner pop punks. The contrast in the slow and melody driven opener and this is wonderful. It immediately shows another side of the band. The song oozes with energy and will have you pogoing around the room whilst singing along. Musically it’s an upbeat song but, in fact, this is another break up song. I really enjoyed the opening lines of the second verse – “I keep checking on your last text, hoping to see blinking dots.” The energy continues on the third song Troll Book Club. Stepping away from the subject of broken relationships, this song looks at feeling alone and trying to make improvements in your life. This energetic pop punk style is really up my street and it puts a massive smile on my face. Musically it’s rapid and has that rawness to it that I love while the vocals do a superb job in carrying the melody.

The fourth song is titled Mums. This song talks about the anxiety that comes with expecting a difficult conversation with someone you’re close with. The title suggests that it’s about a difficult conversation with your mum but I feel like it could be with anyone you’re close with. I like the switch up on this song, more often than not most relationship songs are about the aftermath of the break up rather than the feelings you have before things end. Despite the sad topic, the song remains upbeat which will help give any listener going through something similar a level of catharsis. Next on Tales From A Red Flag Galaxy is Please Excuse Our Appearance. Stubborn Hearts slow things down ever so slightly and show off a more melodic side. The song is about rebuilding and renovating somewhere to make it feel like home. I think everyone is searching for a sense of belonging in some way so I found this subject very interesting. I want a house where bands can play down in the cellar. The penultimate song is titled Mixed Messages. Returning to the subject of relationships, Mixed Messages is about not knowing where you stand in a relationship and asking questions where you feel self doubt and mistrust. The chorus is one of the catchiest on the EP and will soon find a place in your mind. For the final song Stubborn Hearts pay tribute to the late, great Kim Shattuck with a cover of The Muffs’ song Outer Space. The Muffs were a huge influence on so many bands and I think this is an awesome version of the song. It’s a fantastic way to finish the EP with this brilliant tribute.

Stubborn Hearts blew me away on this release, I discovered them through clicking around Bandcamp and have found one of my favourite EPs of 2020. If you like fast, melodic and gritty pop punk then don’t sleep on this duo.
Stream and download Tales From A Red Flag Galaxy on Bandcamp here.
Like Stubborn Hearts on Facebook here.
This review was written by Colin Clark.
Posted by ColinsPRW at 13:23:00