Album Review: This Is What Honesty Sounds Like by Catholic Guilt

I can’t think of many more prolific punk rock record labels than Wiretap Records over the past couple of years. They’ve put out so many great releases from bands such as Burnt Tapes, Call Me Malcolm, Tiny Stills, Spanish Love Songs, Answering Machine, Odd Robot, Problem Daughter and many, many more. A newer band to their roster is Australia’s Catholic Guilt. The Melbourne based five piece have been working hard for a number of years now and they’ve just started to find an audience outside of their home country. They were supposed to make their first appearance at The Fest in 2020 which has now been postponed until 2021. They would have played the festival in support of their newest EP This Is What Honesty Sounds Like which was released by Wiretap at the end of August. 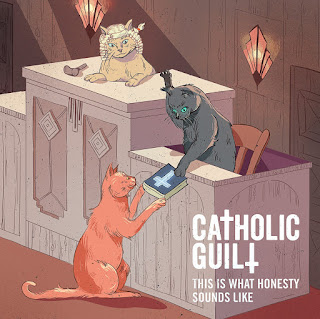 The EP begins with A Boutique Affair which, for me, is the best of the five tracks on This Is What Honesty Sounds Like. This is an up-tempo pop punk song about the struggles of making new friends as you get older, particularly if you grew up as a bit of an outsider. The track begins with a distinctive drum beat and a stop/start guitar riff before the vocals come in. Those opening vocals really hook you in to the song and have you excited to see where the song will go. Something I really like about Catholic Guilt is their use of multiple vocalists. This gives the song so much infectious energy. For me, this is one of the best songs released in 2020. The second track is Song Of The Renter. This is more of a mid-tempo track that will encourage some big sing-alongs. Continuing to use three different vocalists on the track gives it such a fresh and inclusive feeling. That inclusive feeling that the vocals give is fitting as Song Of The Renter was written in hope of becoming a song of joyful rebellion for the current generation that will have to rent their homes because houses have become unaffordable for young people.

Up next is Life In Three Part Harmony. This is a love song that’s equal parts cheesy and charming. During the track, singer Brenton Harris sings about the loving live music and his partner and how the two have become intertwined. This is a slow paced track that has some quiet emotional moments and some loud and powerful moments that will make a crowd erupt. I loved the second verse of “spirits rise, walls fall, between young and old, every major or minor chord played, and every word sung, a communal state, a temporary escape, as all walks of life, become one.” They really had me missing gigs. The penultimate song is titled The Awful Truth. After the emotional love song that came previously, The Awful Truth is much harder hitting lyrically. It’s about the role that the Catholic church has played in child sexual abuse cases. Stylistically this is a very accessible pop song. This will attract people to the song and then let them hear the message without it being too overbearing or distressing whilst still spreading the message. Super songwriting. The final song is named Nothing… and is about grieving over a loved one and the lessons that they taught you. As you might imagine, this is a sombre sounding song. It starts slowly and has these amazing building moments. This adds so much more emotion to the song. You can feel the grief in the vocals and anyone going through a similar thing will find this extremely cathartic. The song finishes with some amazing three part harmonies that have to be heard to be believed. This is such a striking way to finish the EP and will live long in the memory.

I’ve been a big fan of Australian punk rock for a few years now and I love seeing more and more bands from Australia get exposure on this side of the world. Catholic Guilt seem to offer something a little different from a lot of other bands from their country. The multiple vocalists and fantastic lyrics are what really help the band stand out and they should definitely be a band you should be checking out.
Stream and download This Is What Honesty Sounds Like on Bandcamp here.
Like Catholic Guilt on Facebook here.
This review was written by Colin Clark.
Posted by ColinsPRW at 13:27:00