Album Review: Who Killed The Easter Bunny? by Muppethead

Muppethead are a new band from Cleveland, Ohio, who recently appeared on our Band Of The Week feature. They are fast paced pop punk band who refer to their sound as Ohio Dumbcore. Clearly, Muppethead are a band that don’t take themselves too seriously and like to have fun. With how hard 2020 has been for far too many reasons to list here, when I stumbled upon their new EP Who Killed The Easter Bunny? I knew this would be a must listen. I love silly punk rock music. 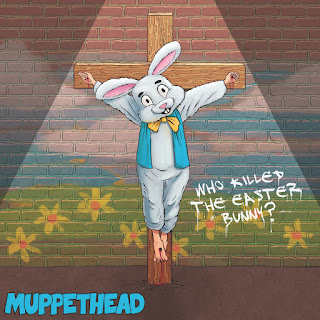 The first track on Who Killed The Easter Bunny? is Hot-N-Ready ($5 Pizza). There’s a good chance that this will be your first time listening to Muppethead and it really lays down a good marker of what you can expect from the band – super fast and catchy pop punk. It’s about being drunk and getting cheap and rubbish pizza. Despite it not being a serious or moving song, there will be plenty of people who will relate to it. The second song has a real feel of The Ramones about it. Titled Now I Wanna Be Alone, it begins with a 1-2-3-4 and then we proceed to some super nasally vocals. The track features some great basslines that give the song a more melodic feel and show that, even though Muppethead aren’t the most serious of bands, they can play their instruments. The song is about being so sick of people that you want to run away to outer space or even go as far as killing them. We’ve all been there at some point, I’m sure. Up next is Hey Man, Nice Set! This is a thirty second hardcore song which I assume is a bit tongue-in-cheek and not just really mean. It’s about when you see a band, telling them you thought they played a nice set and then turning it around and saying they actually sucked.

The fourth track is John’s Got Hemorrhoids. On this song we are treated to a more traditional sounding pop punk song. The drums are played at a rapid pace, ensuring the song is packed with energy. I’m impressed with how well the band’s lead singer manages to keep pace with the song as he barely pauses for breath throughout the song’s duration. Obviously, the song is about somebody named John who has managed to get haemorrhoids and the struggles that comes with that. The penultimate song is A Square In A Circle Pit. The song starts with quite a long audio clip featuring a lady who does not like a band because of their lyrical content before it launches into another hardcore track about going to a show but not liking the music. I enjoyed the clever change of the well known phrase square peg in a round hole to a square in a circle pit. Cracking word play. The final song is the EP’s title track Who Killed The Easter Bunny? This song was used as promo for the EP and it’s obvious to see why. It’s the most conventional sounding song and it’s incredibly catchy. It’s jam packed with this infectious energy that will leave you humming the song to yourself long after you finish listening to it.

This is an EP not to be taken seriously. It is an EP to have a great time listening to and have a great big smile and laugh to. There seems to have been a lot of arguments this year about whether or not politics should be involved in punk or even music in general. It 100% should be involved but you also really need bands like Muppethead who are just out to have some fun, enjoy themselves and hopefully make you enjoy yourself as well.
Stream and download Who Killed The Easter Bunny? on Bandcamp here.
Like Muppethead on Facebook here.
This review was written by Colin Clark.
Posted by ColinsPRW at 13:22:00