Suburban & Coke are a three piece from Perth, Australia. They describe themselves as “self-deprecating party-punk/power-pop for losers, stoners, dropouts, nerds and drunks”. I’m sure everyone reading this will identify with at least one of those descriptions. Way back in April, the band released their first new material since 2014 with the album Shit Party. Featuring twelve songs in less than twenty-five minutes, I had a big feeling that this album was going to be a lot of fun. 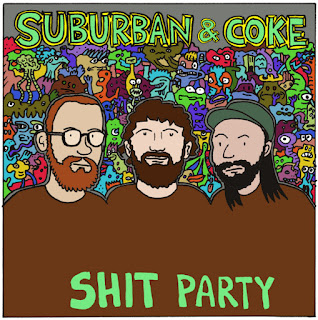 Shit Party begins with Danzig In The Dark. My first thoughts whilst listening to the song was how raw it sounds. I enjoy this style as I feel that sometimes when punk is overproduced it takes away some of its charm. It’s a short song (even by this album’s standards) to get you introduced to Suburban & Coke. They have an up-tempo sound with clean yet somehow raspy vocals. It sounds as if the singer is pushing their vocals to the limit which gives the song some extra urgency. Vicinity reminds me of Billy Bragg’s To Have And To Have Not. This was a great way to hook me into the song with a melody I already recognise. The vocals have shifted from raspy to snotty, immediately showing that the band have more than one string to their bow. The song is about hanging around somebody but never making the move to talk to them. The third song, Her Favourite Murder, talks about being killed by your partner and goes into great detail about the ways in which it can happen. It’s a silly song but also quite sad when you think about it. It’s a simple song that’s not going to win any awards for songwriting but will get stuck in your head and make you have a bit of a sing.

Moshpit Commander is one of my favourite songs on Shit Party. It might be because I haven’t been to a gig since March, but it had me missing the thrill of being in the pit. The song sees a poppier side of Suburban & Coke as they talk about that person who always seems to take control of the pit and being very impressed with them. I get the impression that the song is a bit tongue-in-cheek and, to an extent, is calling out those people who get too aggressive. The opening riff of the song puts a smile on my face every time I hear it. The fifth song is titled What Can I Do About It? This is a no thrills punk song that I think would work just as well as an acoustic song. It’s a fast paced and punchy song with vocals verging on the aggressive side. For me, the song is crying out for some extra gang vocals to give it a fuller sound. Up next is Kim Deal Or No Deal! This is a garage punk song about drifting apart from someone you had relations with. There’s a very simple structure to the song which makes it so catchy. Midway through the song there’s a slight change in the melody of the song that really caught my ear.

The second half of Shit Party begins with I Don’t Wanna Be A Dad. Vocally the song is very urgent and emotional, this sadly makes the lyrics hard to make out at times. That didn’t stop me enjoying the song though. The way in which the melody of the vocals and the guitars differs during the verse creates an interesting effect and you can pick out some great bass lines throughout. Under The Jetty is a rambunctious pop punk track that goes off at some speed. This is one of my favourite tracks on Shit Party. From the opening guitar, which makes me think of an alarm going off and gets you pumped up immediately, the song had me hooked. The vocals go along at a rapid pace – at times the singer tries to fit too many words into the line – this adds even more energy to the song and also gives the song a chaotic edge. I do love a bit of chaos in my pop punk. As the song enters its final section we are treated to a more melodic style which ensures a big sing-along to finish the track. Youtubin’ The Vortex, 1am continues the energetic and chaotic sound. This is the first time on the album where both of the band’s vocalists seem to trade lead vocals, showing off another side of Suburban & Coke. In all honesty, I have no idea what’s actually going on but it certainly sounds as if the band are having a lot of fun.

The tenth track on the album is Loose Change Power Drive. I was seriously surprised when the song started with an acapella introduction. It’s not like listening to a barbershop quartet but Suburban & Coke make it very entertaining and showcase a fine attempt at harmonies. The second half of songs sees the band really pick up the pace with some speedy and snotty vocals along with a harmony filled chorus. This shows how creative the band can be, more so than anything else on the album, and that they’re not afraid to try something a bit different. The penultimate song is the brilliant Dr. Feelshit. This is without a doubt my favourite song on the album. Not only does it really allow all three members to showcase their ability to play their instruments but it’s massive shout-as-loudly-as-you-can-along song. The song is about struggling with mental health and trying to find a way to make yourself feel better. This song makes me really miss being in a sweaty basement, singing along to punk songs with my best friends and favourite strangers. The final song is Too Far From The Coast. This was another surprising song as the first half was an acoustic, heartfelt song before it finishes with the full band frantically jamming to complete the album. The vocals are heartbreaking and show a softer side of the band. Of course, this softer side doesn’t last for long when we get to the song’s dramatic conclusion.

Shit Party is one of the more unique sounding pop punk albums I’ve listened to this year. I enjoyed the rawness for the most part but, at times, it did make it hard to listen to. That said, this is an album I will return to again and again as I feel like there’s loads of fun lyrics I missed. If you fancy listening to something a little different but is also a lot of fun, look no further than Shit Party by Suburban & Coke.
Stream and download Shit Party on Bandcamp here.
Like Suburban & Coke on Facebook here.
This review was written by Colin Clark.
Posted by ColinsPRW at 11:43:00