Album Review: Thanks, I Hate It by Kid You Not

Florida’s Kid You Not have been a big favourite of mine for a few years now so the news they were releasing a new album filled me with joy. Co-released by Deep Elm Records and Bypolar Records, the album is titled Thanks, I Hate It and it features ten new mid-tempo gruff punk anthems. The album was released on the 30th of October so I assume that The Fest was supposed to be their album launch show – I was really looking forward to seeing Kid You Not live for the first time in Gainesville and listening to these songs live would have really been a special time. 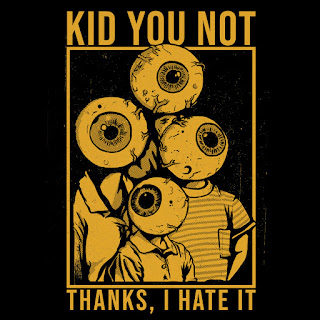 Track one is named Here’s To Those Who Wish Us Well. This track serves as part introduction/part song. It’s a shorter track that sets the scene for the entire album, building dramatically and featuring some emotional vocals addressing mental health. It leads wonderfully into the second track, And Those Who Don’t Can Go To Hell. This song instantly feels fuller than the opener and strikes me as the first proper song on the album. The vocals are so powerful and are delivered in a way that will have you singing along and seriously invested in the track. The way that the song builds at the start got me really pumped up for what was to come and, when they vocals begin, it’s like a punch in the face – but in a good way. The track is about writing music and creating the best song you possibly can. Fantastic Drugs And How To Take Them is the title of the third song. This song is about using drugs, prescription or not, to help with your mental health and the effects of that. It will be a relatable song for many, including myself, and will earn some big sing-alongs from crowds in the future. I love the use of gang vocals during the song as it’s such a relatable song for so many. It gives a nice feeling of everyone being in this together and will bring folk together.

Up next is the album’s title track, Thanks, I Hate It. The song continues the theme of mental health, with Kid You Not’s lead vocalist singing about finding a purpose due to being cynical about life. This was an interesting topic for a song and one I related to far more than I thought I would. My cynicism often drives me to try and make things better and, in my mind at least, right. There’s a familiarity about this song that I found quite comforting. It’s easily accessible because of this and kind of feels like putting on your winter jumper for the first time in a year and feeling all cosy and warm. Agony Breathing was a stand out on my first listen through of the album. The track takes you on more of a ride than any of the previous songs. At times it feels quite stripped back before reverting to that glorious full sound the band have perfected over the years. The chorus is one of the catchiest on the album and will quickly get stuck in your head. Agony Breathing talks about looking back at your past mistakes and trying to learn before eventually finding comfort.

The second half of the album starts with Condolences. Starting in a similar way to the first half of Thanks, I Hate It, Condolences is a shorter a slower track that serves as an introduction to the second half. The drums provide a great spine whilst the guitars buzz off it. This leads nicely into The Bums Lost. Immediately the track bursts with energy with an up-tempo beginning. That beginning is brought to a startling halt with the lyrics “I feel like I’m dying, and sometimes I wish I was, to get it over with.” These lyrics really set the tone for the song. It’s about feeling lost and confused in your life due to your mental health. As the song progresses the band talk about wanting to try and make a change but being too stubborn. The slower bridge that builds towards the song’s final moments is one of my favourite moments on the entire album. Handbook For The Recently Deceased was a song that I knew was for me as soon as I heard the opening guitars and then the huge vocals. The guitars in particular really stood out on the track, with an intricate riff buzzing amongst those gruff vocals. They gave the song a poppier feel without taking away any of Kid You Not’s edge. I feel like this could become one of Kid You Not’s most popular songs, especially live. It has that quality that can really capture a crowd’s attention and feel like they are a part of the song.

The penultimate song is named May I Never Be Complete, May I Never Be Content, May I Never Be Perfect. After a crashing start we jump to just vocals and guitar before slowly building the song back up. This is a great way of first grabbing the listener’s attention and then really keeping them invested in the song. By the time the chorus rolls around we are treated to that full Kid You Not experience – that beautiful, full sound and some delicious gang vocals. My interpretation of the song is that it’s about self improvement and never settling for something you know could be better. The final song on Thanks, I Hate It is Inside Every Cynic Is A Disappointed Idealist. The song starts in a quiet and sombre fashion before the vocals come in. I enjoyed how the entire song seemed to use gang vocals. Kid You Not have this brilliant ability to make the listener feel involved as all great punk bands should do. The song is about having big dreams and feeling like nothing can stop you before learning that there are plenty of things that will put a stop to your progress along the way. I’m guessing that Kid You Not’s dream was being in a band and the overall message is that, despite any bumps in the road, they will keep doing what they love because they have to. The album finishes with a feeling of hope and positivity that will hopefully inspire people going forward.

Kid You Not have always been a very solid band but their songwriting on Thanks, I Hate It seems to have come on leaps and bounds. If you’re a fan of bands like Iron Chic, Red City Radio or, in the UK, Burnt Tapes or The Run Up, then you should already be aware of Kid You Not – if you’re not then I seriously suggest you fix that.
Steam and download Thanks, I Hate It on Bandcamp here.
Like Kid You Not on Facebook here.
This review was written by Colin Clark.
Posted by ColinsPRW at 09:57:00