Folkert Van Kerckhove of Koala Commission, Chrandesyx and El Topo All Stars has yet another new band – Prize Dink Camp. The trio, completed by Lander De Visscher (also of Koala Commission and El Topo All Stars) and Zeno Van Moerkerke, play synth-lead ska punk music. Not something you often hear, but in the hands of these three gentlemen, it works really well. In November, the trio released their debut EP titled Memez, Dreamz and Limousinez. It took me far too long to get round to giving it a proper listen but, when I did, boy golly did I enjoy it. 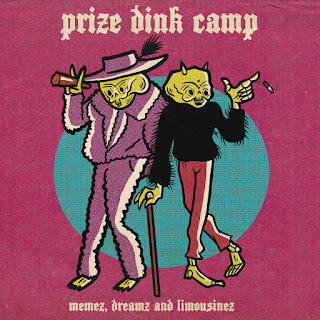 Memez, Dreamz and Limousinez begins with the song Mental Breakdown Polka. Starting out with Lander's immense key playing, giving the song a bit of a dramatic opening, before leading the listener into an upbeat section that will have them moving from the outset. It's not long before Folkert's fantastic voice comes in and he leads us through the song. If you've never heard Folkert sing before, I think his voice is best described as soft, melodic and captivating. There's a ferocious keyboard lead breakdown in the middle of the song that really helps the song transition into its final moments, getting a crowd amped up one last time. Up next is The Floor Is Lava. It's quite a lengthy song at four minutes and forty-six seconds but it packs lots in. Whereas the first track featured a lot of keys, The Floor Is Lava is much more of a guitar lead song. It's understated though, allowing the listener to really focus on the vocals. The song’s big moment really comes in the chorus with the commands of "the floor is lava, so you better jump around." Like Mental Breakdown Polka before it, The Floor Is Lava finishes in a big way with Folkert singing some "whoa-ohs" as the rest of the band add some gang harmonies of "jump, jump, jump around." It's such an energy boosting way to finish the song. The final song is titled Billy. The song opens up in a crunching fashion – apparently it is possible to "crunch" with a keyboard. I was very impressed with how well Folkert and Lander managed to get the guitar and keys working together on the track, both seem to lead but also allow the other to shine. This is definitely the hardest of the three tracks on Memez, Dreamz and Limousinez, showing some great variety from the band. It's a song about how the world is in decline, so the harder style works really well with the message of the track. This was the perfect choice to finish the EP with as it leaves you thinking about a serious issue.

I love how different Memez, Dreamz and Limousinez is from every other ska punk release out there. It's always refreshing when a band tries to do something different and also manages to pull it off. This is a seriously talented trio and definitely need your attention.

This review was written by Colin Clark.
Posted by ColinsPRW at 11:47:00