Album Review: A Dog's Life by The Muttnicks

I first became aware of German punk rockers The Muttnicks after seeing them on a boat in Hamburg Harbour at last summer’s Booze Cruise Festival. I was instantly impressed with their live show, being slightly reminded of The Bouncing Souls during their set. The Muttnicks are a relatively new band in the German punk rock scene, having only formed in 2017, but already seem to be making a name for themselves. Last November they released a brand new EP titled A Dog's Life. It took me way too long to get round to checking it out. 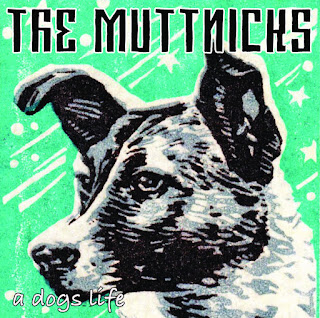 A Dog's Life begins with the song Changer. It starts with a welcoming guitar introduction, played at a mid-tempo pace that builds nicely towards the vocals. Vocalist Phil Muttnick has a great voice, it's clear but also contains plenty of power and venom, making you really feel what he's singing. Changer is about making positive changes in the world so that it's a better place for everyone. The song has some great sing-along moments that will bring a crowd together in such an uplifting way. Up next is Toxic (sadly not a Britney Spears cover). The uplifting nature of the opening track disappears here and is replaced with a pretty sad track about being in an abusive relationship. Throughout the song, Phil lists the ways in which one half of a relationship has been horrible. I'm sure most people will find at least one thing on this list to be relatable in someway so the track may be slightly cathartic for them. Towards the end of the song it does seem to get more positive as Phil sings about making the choice to end things. The final song on A Dog's Life is perhaps the hardest hitting. At just a minute and a half long, this is verging on a hardcore song. My Decision is about not being afraid to be whoever you want to be despite what people might think. This is a really powerful and uplifting way to finish the EP. All the best hardcore tracks have an uplifting nature about them and My Decision certainly has that.

In 2019 we discovered a lot of great bands from Germany thanks to Booze Cruise and The Muttnicks are without a doubt one of my favourites. A Dog's Life shows them as a band who aren't afraid to speak out on big topics and have the ability to write songs that really make you feel something when you're listening to them.

Like The Muttnicks here: https://www.facebook.com/themuttnicks/
This review was written by Colin Clark.
Posted by ColinsPRW at 12:13:00