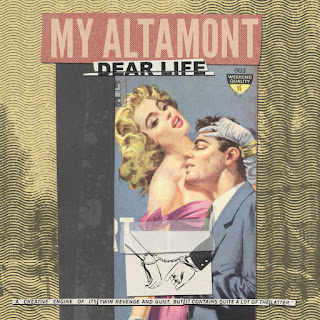 The opening track on Dear Life is named Love And Affection. Instantly I can hear The Ramones influence on My Altamont. The buzzing guitars and simple but driving drums and the Joey Ramone-esque vocals really grabbed my attention. The song is about how your actions and behaviour, even if you don't mean it, can have big effect on your relationship. I thought a really nice touch was to include a female backing vocal (provided by Sandra Bullet) on the song. It helps the track play out like it's a conversation between the two of them. Gravity's Staircase is a slower song that's also really sad. It's about the life of an astronaut and how when you're in space everything is fine but being back on Earth you suffer heavily with depression. It's really interesting song topic that I've, unsurprisingly, not really heard before. My Altamont does a wonderful job of painting this picture that really allows you to imagine what's going on.

The third song on the EP is titled My Whole Life. Picking the pace back up, the song is a bit retrospective as My Altamont looks back at things they've done in their life and comes to the conclusion that they've been wasting their life. Despite the general glum feel to the song, it actually sounds quite upbeat and is packed with hooks and will get stuck in your head pretty quickly. The penultimate song is named The Greatest Day. That title is pretty misleading as it's another really sad song. On this track, My Altamont talks about being in a car accident, being hurt and believing that it's the best thing for everyone. Sad, sad stuff. My Altamont just broke my heart on the track, one of the saddest I've heard in some time. The tempo is again picked up for the final song, Sad Summer. Obviously, from that title, it's fairly obvious what it's about. On the track, My Altamont looks at what it's like when you're struggling with depression, not being able to get out, or even up out of bed during the summer whilst everyone else is out having a lovely time. I do prefer My Altamont when they are playing this more uptempo style, probably because I'm a massive Ramones fan. The big chorus at the end of the track is the perfect way to finish this fantastic EP.

This review was written by Colin Clark.
Posted by ColinsPRW at 14:51:00