Album Review: Return Of The Infamous Four by Drunktank (by Brett Coomer)

Drunktank released Return Of The Infamous Four all the way back in July of 2019, their first album since 2010’s Infamous Four. I had never heard of the band before picking up this review, but when a band is described as "energetic mix of skatepunk and 80s metal" my interest is immediately piqued. With a name like Drunktank and a tagline of "damaging ears and drinking your beers since 2003", it's clear that the band members have a sense of humour, don't take themselves too seriously, and have a lot of fun doing what they do. 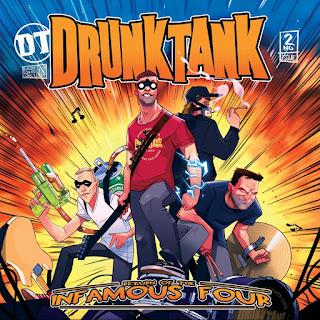 Drunktank are a four-piece band from The Hague, Netherlands, that formed in 2003. By 2010 they’d released 4 EPs as well as their first full length album, and described themselves as fast, melodic and singalong 90s skate punk with a pinch of 80s metal. Since I hadn't heard of the band before, I decided to listen to their debut album to get a feel of the kind of music they've played over the years. I found that it leaned more towards skate punk with small touches of metal, featuring riffs and a tone similar to early Lagwagon.

Return Of The Infamous Four’s stylised artwork reminds me of the mid-2000s Adult Swim animated series Metalocalypse which I never really watched to be honest, but it immediately made me think this album would feature a heavier metal influence and I was not disappointed. Drunktank’s latest album dials up the 80s metal guitar riffs and solos without forgoing the fast skate punk promised by the band’s self-description – providing listeners with plenty of head-banging and singalong moments throughout the album. Even with some member changes since the release of their first album, Drunktank have stayed true to their theme, sense of humour, and the diverse set of influences.

Return Of The Infamous Four wastes no time kicking into gear, with ‘We Want More’ and ‘Hammer Of Justice’ setting the tone for the rest of the album with gang vocals, harmonised guitar riffs and a catchy singalong chorus on ‘We Want More’. The third track, ‘Waste Away’, is where the album really hits its stride though. The song features a strong melody and some satisfying harmonised guitars and vocals, highlighting the best of Drunktank in just under 2 minutes. The quality continues with ‘Green Button’, which has some resemblance to Propagandhi and, of course, guitar solos.

The 80s metal dial is turned up to 11 on ‘Hellraisers’, with squealing pinch harmonics and an anthemic chorus which I can imagine being belted out by a leather-pants-wearing lead singer with long but perfectly prepared hair (from what I’ve seen on YouTube, the Drunktank members are neither long-haired, nor do they wear leather pants on stage, but it wouldn’t be completely out of place). ‘Courage Of The Few’ stands out as one of the songs with a political edge, about coming together to fight injustice. The lyrics aren’t on the level of Bad Religion, Good Riddance or Refused but it’s nice to hear a more serious side from Drunktank.

‘Raising The Bar’ is more straight-forward punk and unfortunately does not live up to its title. It’s not bad but is definitely one of the weaker tracks on the album. Thankfully Drunktank return to top form with ‘Army Of Darkness’, a fast and relentless track about an army of undead warrior assassins which could be construed as a bit cheesy and/or fun depending on your feelings about the zombie apocalypse.

The album doesn’t let up going into the final two songs. ‘Darker Side’ showcases what the band does best, mixing melodic punk and metal with some nice guitar work and harmonised vocals. The titular final song is a reminder of the band’s mission statement of damaging ears and drinking your beers, and has a cool guitar solo that fills most of the final minute. It’s a strong finish to a good album and makes you want to answer the call to raise your fist and make this scene better than all the rest.

Return Of The Infamous Four is pretty much a continuous onslaught of metal infused fast-paced melodic skate punk, but there are a few aspects that help to set it apart in the genre. And although the music will definitely appeal more to fans of skate punk, there is enough here to draw in people who like metal, hard-rock and fun in general. Hopefully it’s not another 9 years before we allow Drunktank to damage our ears with a new album.

Stream and download Return Of The Infamous Four here: https://drunktankpunk.bandcamp.com/

This review was written by Brett Coomer.
Posted by ColinsPRW at 12:13:00