It’s that time of year again. That time when Christmas and New Year’s Eve/Day are done and dusted and you start to look forward to the year ahead. I imagine a lot of people reading this will be looking at the plethora of punk festivals available to them and deciding which they want to go to. Emma and I decided early which we would be going to. Here's a little preview of them to help make your decisions easier!

Do It Together Fest, 24th–25th January 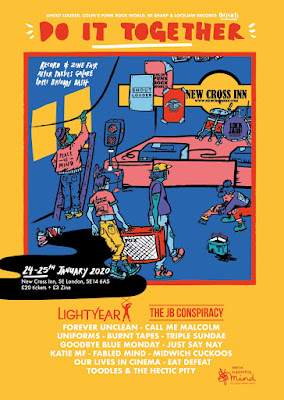 Of course I'm going to this, I've helped to organise it! Together with my best buds from Be Sharp Promotions and Shout Louder, we've put together Do It Together – two days of brilliant DIY punk rock bands from all genres and headlined by the one and only Lightyear! My mind is still blown by that. Taking place at our home from home of the New Cross Inn in South London, also appearing will be The JB Conspiracy, Eat Defeat, Burnt Tapes, Call Me Malcolm, Forever Unclean, Triple Sundae, Goodbye Blue Monday, Uniforms, Katie MF, Just Say Nay and more! The theme for the festival is celebrating the punk rock community and all the wonderful people in it. It's going to be a proper mates fest, so come be our mate. 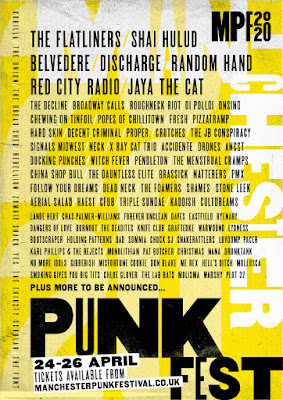 The UK's best punk rock festival returns for its sixth edition and it's looking better than ever – and the whole line-up is yet to be announced. I've been going to Manchester Punk Festival every year since it started and it's been so wonderful seeing it grow into the can’t miss event that it is now, whilst sticking to its core DIY fundamentals. It's basically a punk rock family reunion where it seems like everyone we know from the punk rock scene – not just in the UK – makes the pilgrimage to Manchester. It's a weekend of the best bands and the best hangs. So far they've announced international acts such as The Flatliners, Red City Radio, Shai Hulud, Belvedere, Broadway Calls and Signals Midwest, as well as UK acts Random Hand, ONSIND, Roughneck Riot, Popes Of Chillitown, Ducking Punches, Fresh and PMX. The festival has one more announcement to go and I suspect it's going to be amazing. 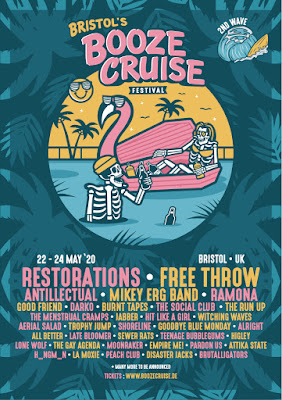 The first incarnation of the Bristol Booze Cruise happened last year and we were gutted not to be able to make it. We then decided that this year we would definitely be attending. Aiming to showcase smaller bands not just from the UK but from North America and mainland Europe as well, the festival has only had one announcement so far but our decision to attend has already been very much confirmed. I was so excited when I saw bands such as Restorations, Free Throw, Mikey Erg, Antillectual, Ramona, Trophy Jump, Moonraker, Sewer Rats and Lone Wolf were coming to the UK to play alongside The Run Up, Darko, Burnt Tapes, Goodbye Blue Monday, Aerial Salad, Brutalligators, H_ngm_n and Pardon Us. There's another corporate rock festival happening this weekend but Bristol for Booze Cruise is definitely the place to be.

Last year we went to our first Hamburg Booze Cruise Festival and it was one of my highlights of the entire year. Taking place in a handful of venues around Hamburg docks, including a boat, Booze Cruise is the best time. It's a super friendly and inclusive festival where you can go not knowing anybody and leave with a load of new pals. The best way I can think of describing it is as the best European equivalent to The Fest in Gainesville. You will find a great combination of established and up and coming punk rock bands from both sides of the Atlantic Ocean. The line-up is yet to be announced but I'm sure you can get some clues from the Bristol Booze Cruise line-up…

In all honesty, I don't have a lot of information about Kaiser Fest. I know it takes place in Antwerp, Belgium, and I know that it's put together by the guys from Captain Kaiser and that our buddy Jason from El Topo Bookings is helping out. Last year they had The Copyrights, Kepi Ghoulie, The Priceduifkes and Lone Wolf on the line-up. Already announced for this year are Captain Kaiser (obviously), Goodbye Blue Monday (we're basically following them around in 2020), Coma Commander, Beans On Toast, Funeral Dress, The Sewer Rats, Aster and Tom De Ridder . That'll do nicely. 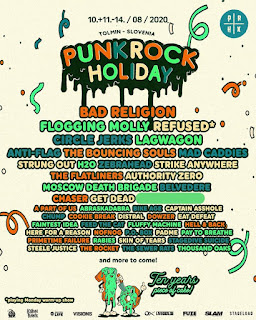 Perhaps the biggest punk rock festival in Europe now, Punk Rock Holiday is celebrating its tenth anniversary. Taking place in Tomlin, Slovenia, it's a festival whose setting we've long admired from afar and we decided it was finally time to pay it a visit. Particularly because there are apparently plans to build a road right through the middle of the grounds. They always attracted the biggest names in punk rock and this year is no different with Flogging Molly, The Bouncing Souls, Anti-Flag, Refused, Strike Anywhere, Bad Religion and Mad Caddies. If that's not enough, the beach stage is showcasing some of the best underground bands in the world with Eat Defeat, Captain Asshole, Faintest Idea, Abraskadabra, Petrol Girls, P.O. Box, Chump and The Sewer Rats making me very excited to attend this festival.

This column was written by Colin Clark.
Posted by ColinsPRW at 17:26:00