We first came across Mexico’s Shinjoku Riot when they toured with our pals in Burnt Tapes back in 2017. We got to see them play the band’s launch show for Alterations at Urban Bar in Whitechapel and were seriously impressed. Since then I’ve been waiting for the band to release some new material so we can finally feature them on CPRW. Back in July they finally did with the release of a four track EP named You Belong Here. Let’s give it a listen. 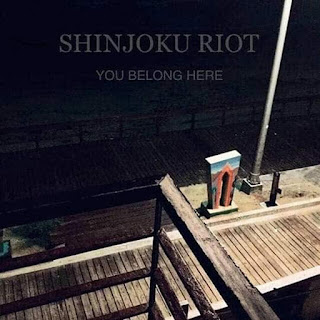 The opening song is named I’m Not Gonna Be Late For The Fucking Dance, Man. The track starts with some guitars ringing out and a drum roll before lead singer Rafael Rosas screams out “1, 2, 3, 4!” and the song really gets going. The song shows definite 90s skate punk influences, in particular No Use For A Name. Vocally there’s a modern sound that would fit nicely into the Fest punk sound that is perfect for singing along with. The next song is Straight To Your Face. The band released this track as a single in the lead up to You Belong Here’s release and it got me excited for the EP. It showcases the band’s softer and poppier side and was a great choice of song to put some eyes on the EP. I was hooked on this song from the moment I heard it. It has some great pop sensibilities combined with some wonderful vocals. The bridge towards the end of the song that leads to a final chorus is the cherry on top of a great song.

The third song Creando Momentus is sung in the band’s native Spanish. Translated into English Creando Momentus means ‘creating moments’ so I guess the song is a positive one about living your best life. As I don’t speak a word of Spanish I can’t comment on the lyrical content but I did enjoy the overall feel of the song. The guitars feel warm and retrospective and the use of gang vocals throughout the song gives the song that inclusive feel. I really appreciate that, as I don’t speak the language. I also just really love gang vocals. The fourth and final song is titled Face First To The Ground. This track features quite a long musical introduction before the vocals come in. I always enjoy when the last song on a EP or album feels like a last song and Face First To The Ground certainly feels that way. I loved the way in which Rafael delivers the vocals during the first half of the song before the track gets a bit more intense during its middle section and then builds towards its big ending. The final instructions of “break out the good times” that ring out during the end of the song ensure that it finishes on a positive note. Something we need in 2020.

You Belong Here takes Shinjoku Riot to a whole other level. All four songs on the EP are potentially the best the band has written. The overall sound of the EP is great as well, it doesn’t feel as if any expense was spared with the recording and production. If you’re unaware of Shinjoku Riot and you enjoy sing-along pop punk then I suggest you check them out pronto.
Stream and download You Belong Here on Bandcamp here.
Like Shinjoku Riot on Facebook here.
This review was written by Colin Clark.
Posted by ColinsPRW at 11:32:00