Album Review: More Than Drugs by On My Arms

On My Arms are a four piece band from Venice, Italy. The band formed in 2011 and are heavily influenced by bands such as The Ramones and The Queers, as well as more modern day acts such as Teenage Bottlerocket. I first became aware of the band due to their excellent Life At Thirty EP which was released in 2018. In May, On My Arms released a new five track EP titled More Than Drugs that I was very keen to check out. 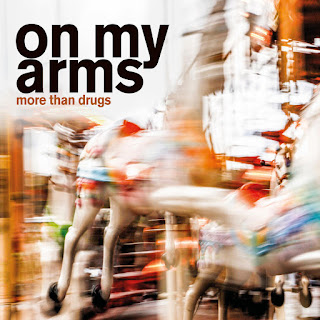 More Than Drugs starts with Make It Up To You. As you have probably worked out from the song’s title, it’s about making things right with your loved one. Looking at the band’s influences you might expect a more fast paced track but On My Arms start out with a more melody driven song packed with catchy hooks and wonderful harmonies. The repetitive nature of the song makes it instantly accessible to anyone hearing the band for the first time. It’s like meeting an old friend. Up next is Never Alone. On this second song the band pick up the tempo and give the EP a boost of energy. Track one welcomes you in and track two fills you with the energy you’d expect from a Ramonescore band. Never Alone is about feeling lonely but knowing that whenever you go to a gig, particularly in the punk scene, you’ll have a friend. It’s a special feeling to be in that environment and it’s one I’m sure everyone reading this is missing.

The third song is the EP’s title track More Than Drugs. This is a song about realising that you need to make yourself better because there are great things in life that you want to experience. On My Arms revert back to their mid-tempo sound for this song. This helps to really show off the emotion in the track and particularly in Ganz’s voice. The penultimate song is named Up & Down. On my first listen of the song I was attracted by the bouncy rhythm but when you listen to the lyrics you discover the song has a darker context. On My Arms sing about coming to the end of a relationship and the difficult conversation that you need to have because of this. This is another superbly catchy track, even if the subject matter is sad. Last up is Going Home With You. On My Arms finish More Than Drugs with what’s perhaps my favourite song of theirs. From the outset it’s an uptempo sing-along that’s full to the brim with this infectious energy. The way in which Ganz delivers the vocals is fantastic, punchy on the verse and then loads of melody in the chorus.

More Than Drugs is another solid addition to On My Arms’ growing discography. The European punk scene has so many fantastic bands who play homage to The Ramones and On My Arms are one of the best.
Stream and download More Than Drugs on Bandcamp here.
Like On My Arms on Facebook here.
This review was written by Colin Clark.
Posted by ColinsPRW at 13:16:00

Email ThisBlogThis!Share to TwitterShare to FacebookShare to Pinterest
Labels: 2020, Album Review, On My Arms, Pop Punk, Ramonescore, Self Released