Dream Nails are an all-female four-piece from London. The band was founded in 2015 by like-minded feminist activists and they’ve been successfully spreading their unapologetically political pop punk throughout the UK and Europe ever since. Their debut self-titled album was released at the end of August and, although it may seem a long time coming to fans that have been with them from the start, it has most certainly been worth the wait. 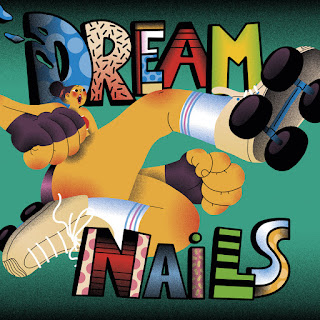 With 15 songs on its track list but a run time of around 24 minutes, I was expecting this album to be packed full of super fast, super catchy pop punk songs. Well, it is full of some pretty fast and catchy tunes, but some of those 15 tracks are actually well placed short interludes – or skits as Dream Nails have called them. The album opens with the first of these, Affirmations, and the statement ‘I am ready. I fear no one and nothing except the temptation to hold back.’ before the bouncy bass line of the second track plunges us into the album properly. Jillian is a care-free and feel-good song that brings to mind a much sunnier and warmer day than the one I’m currently experiencing at the time of writing this review. I had to ask my trusty friend Google but the Jillian in the song seems to be Jillian Michaels, American personal trainer. The song is a lively and not too serious way to kick off the album. Another short skit follows asking the question Do You Want To Go To Work? (‘no’) and Are you going to go to work? (’yes’) before leading us into an anger fuelled anthem of a song for all those that work in a corporate job that they hate. In Corporate Realness Dream Nails proclaim ‘You are not your job, Work is not your life, You are not what you must do in order to survive.’ which I can imagine will be a real comfort to many listeners. It’s also nice to hear a band acknowledge that sometimes you have to work a job you hate in order to get by, instead of just suggesting that you should quit because not everyone is able to do that.

Next up is Text Me Back (Chirpse Degree Burns) which opens with a super melodic almost indie punk style guitar riff and rhythmic drums. The instruments take a backseat as lead vocalist Janey Starling begins to sing a tale of meeting a new person you like and what ensues when they then don’t text back shortly after that. It sounds kind of silly – and I guess it is to some extent – but I’m sure, like me, you can relate to what Dream Nails are singing about when you’ve sent a message and can see they’ve read it but haven’t replied. Maybe we’d be better off without phones or at least without read receipts! The classic Dream Nails track Vagina Police is next but not before an interlude, Women And Non-Binary People To The Front, that declares solidarity with trans folk and that not all women have vaginas. Vagina Police 2.0 is a re-recorded version of the song the band originally released back in 2018 but still has the raw passion and energy of the original. The fast paced and ferocious track is a protest in favour of abortion and women’s rights to do as they chose with their own bodies. It was an important and worthy message in 2018 and it certainly still is now as well. DIY is the name of the eighth track on the album and it’s another Dream Nails song that has been around for a while but it appears on the album nonetheless because it’s such a great song. It’s the song I remember most when I think about the last time I saw Dream Nails live, which sadly was way back in 2018 (with Iron Chic and Mobina Galore at The Dome), as it’s an awesome live track. As you might have guessed from its title, DIY is about doing it yourself – whether that means fixing your bike, starting a punk band or making peanut butter. It’s a bouncy, joyful, uplifting and empowering listen that is a hell of a lot of fun to sing along to. The pace is slowed down somewhat for People Are Like Cities as Dream Nails take a slightly different turn musically. The song is about how you can never truly know everything about a person, just like how you can never truly see every part of a city. Lines such as ‘And there are dark streets in you, where I don’t wanna go.’ make you pause for thought and fully take in and agree with what Dream Nails are singing about.

The summery vibes are back for the next two tracks. First is Swimming Pool, a cheerful sugary pop punk song about – you guessed it – going to the swimming pool with your friends and crush. There’s a sense of washing away all your worries and just having a nice time throughout the song, with ‘It’s gonna be okay’ repeated throughout the bridge. The track also features some wonderful harmonies and vocal exchanges which further boosts the having a nice time with your friends vibes. The second of the two summer-themed tracks is the aptly titled This Is The Summer. It’s not as fast-paced as some of the previous songs on the album but certainly brings a feeling of sunshine to our ears (which, once again, is very welcome on a dull and rainy October day), as Dream Nails sing of heatwaves, being struck in traffic on the way to the beach and the smell of suncream. It feels, to me at least, to be about that specifically British summer time that we spend the rest of the year dreaming of only to complain that it’s too hot when it finally arrives. Before we get to track number thirteen we have another interlude, this time offering up some helpful Fighting Tips. Get ready to crank the volume up for Payback as, after a drumroll and a scream, Dream Nails deliver a huge rocking ’n’ rolling guitar riff to rival your dad’s (or, in my case, mum’s) favourite 80s hair metal band. Alongside shouts of ‘One day, we’ll make, you pay!’ and slower more stripped back verses, Dream Nails deliver a real standout track here. If you didn’t already want to sing along with the band prior to this track then I’m sure the bridge of ‘Hey! (Hey!), Mister! (Mister!), Get your hands off my sister!’ will get you shouting along. The last skit of the album, In Other News, is a clip from a news report about a homophobic attack on two women who were on a London bus which leads us into the last song on the album. Kiss My Fist starts slowly and quietly but it’s immediately clear that Dream Nails don’t intend to stay quiet as they have a lot of justified anger built up and ready to unleash on the world. Kiss My Fist is about men who are quite happy see lesbians when it suits them and is for their own entertainment, such as onscreen, but are disgusted to see a couple holding hands in the street. The song is the perfect combination of rage and frustration and does a fine job of ending the album with a bang.

Dream Nails is out now on Alcopop Records and is well worth adding to your regular rotation this autumn to bring a little sunshine back into your life.