Apathy Cycle are a four piece punk rock band from California who formed in 2009. Featuring members of bands such as Intro5pect, Broken Society and Leftöver Crack, the band have previously released two EPs, the last was in 2014. Then back in April, after six years, the band released a self-titled full-length. This is how I first came to find them. I gave it a listen because I enjoyed the artwork and was pleasantly surprised by the mix of skate punk, hardcore and ska that the band play. I had to delve further into the album. 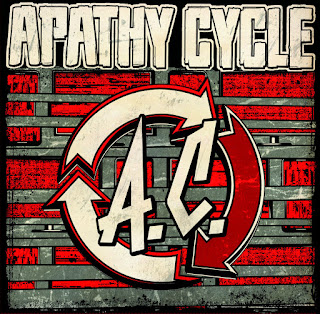 The album starts with a short intro that sounds like a futuristic flatline before the second song Premium Healthscare abruptly starts. Apathy Cycle pull no punches immediately, really giving a feel of what to expect from the entire album. It’s a hard hitting skate punk song about the American healthcare system and how it’s run in a way where they find ways to exploit sick people to make more money. I’m equally sad and disgusted that this is how the system works in the USA – it’s not right. The next song is titled Rise and begins with cries of “unity, unity” before a strong bass line moves us forward. The track is about coming together in your community and taking back what the powers that be have taken from you. Musically the song goes at a ferocious pace but the vocals and harmonies are packed with melody. There’s a nice moment which really caught my attention where the band briefly switch into a crusty skacore style – displaying the Leftöver Crack influence. Forgotten Genocide starts out with a ominous sounding introduction before making the switch to a skacore style. Being a massive ska kid at heart I absolutely loved this. The song makes you think you’re getting ready for a gigantic circle pit before switching things up and getting you skanking up a storm. Throughout the song it does switch between the more melodic skate punk sound and the ska which creates an amazing sound. The song itself looks at horrific moments in history that have been forgotten and how this is wrong. They make the point that if we don’t remember these atrocious moments in our past, we will repeat them in the future.

Muted Light shows the slower side of Apathy Cycle. This slower style really helps to get Apathy Cycle’s message across in the song. The song gives hope to the youth who want to be free thinkers but are told not to by their elders. Apathy Cycle encourage free thinking and spread the message that it’s right to think differently to how you’re often told you’re supposed to. The moment when the song stops completely and begins to build itself back up is perfect as it really helps to drive home the powerful message in the song. The sixth song, named Feeling Snowed In, is about being trapped by the system and not being able to do anything about it. This song really allows the band to show off some serious musicianship, some of the guitar lines in the song seriously shred and are very creative. There is one at the beginning that makes me think of a very angry surf rock sound. It shouldn’t work but it does. The song also features some great Bad Religion-esque harmonies that add another layer to the track. I Objectify has a lengthy introduction that leads to some sharp vocals to begin the song. The track looks at how social media has turned society into an army of judgemental people, whether they realise it or not, and how it’s changed our culture from empathetic and caring to one “based on fear and apathy.” There’s been a lot of discussion in recent years on the pitfalls of social media and how it affects people’s mental health which makes the song even more thought provoking.

The eighth song, Wanderlust, gets off to an energetic start that builds towards a song that’s about life on tour and feeling at home on the road. The song paints a powerful picture of what life on the road is like. There are difficult and scary times but the feeling of solidarity with your band and the moments you get to experience are ones to be cherished. The album has been very politically and socially heavy up until this point so it was nice for Apathy Cycle to freshen things up thematically on this song. Narcissists Anonymous is another Apathy Cycle song that brilliantly mixes together a host of styles to create something quite stunning. At times they are at their most ferocious and then all of a sudden they whip out what sounds like a saxophone. The track is about how people change for the worse when they get a bit of fame, success or money. I really liked this as a song subject as it’s not one you often hear and it’s sadly something that happens far too much. Critical Thinking is a fast and furious skate punk song for the most part but does occasionally dip its toes into the skacore sea. The track is about forcing yourself to question things despite the potential for arguments and fights. The band make the point that critical thinking is really all that we have in life and you have to be strong enough to voice your opinions on things. This may be me thinking way to deeply about the song but I absolutely loved the switch to ska for the line “we all just want to belong.” Ska is unity music so this is a great little Easter egg.

Trigger Warning is the name of the eleventh song on the album. Due to recent events in the USA, this song feels more relevant than ever as it’s about police brutality and how they can show prejudice when they obviously shouldn’t. As you might expect from a song covering this subject, it pulls no punches and I personally found it to be quite an emotional track. The final message on the track is “the time has come to break the wall of silence.” To me, this is Apathy Cycle proclaiming that we should not stand for this anymore and we need to speak out now more than ever. The penultimate song is titled Antonia’s Against The Wall. You have probably worked out that this songs looks at President Fart’s yearning to build a wall between America and Mexico and the band’s displeasure of that. Despite the serious subject matter, the track shows Apathy Cycle’s playful side in this full on skacore track. When I first heard it I found myself skanking around my front room and having a wonderful time. Then I took the time to sit still and read the lyrics and learnt what the song is about. The chorus in particular is powerful as the band repeatedly shout out “Antonia’s against the wall.” I feel like this would be quite the moment at a live show. The final song on the album is Schadenfreude. This is another fun sounding song to finish the album off. It’s a fast paced sing along with the serious message about people taking pleasure from someone else’s misfortune and how that shouldn’t happen. The band aren’t talking about someone tripping up a curb or slipping on some ice but taking advantage of something bad happening to someone and profiting from it. This world needs more empathy and people working with each other rather than against each other to get ahead.

I can honestly say that Apathy Cycle has released one of my favourite skate punk albums for years. I’ve often shied away from reviewing too much from the genre as I often find it boring and repetitive. This album couldn’t be further away from that statement. It’s a lot of fun and looks at a lot of very important topics. There’s also a feeling of positivity that comes from the album that says if we really want, then things can get better. If you’re a skate punk fan, or even if you’re not, then this is an album you really need to check out.
Stream and download Apathy Cycle on Bandcamp here.
Like Apathy Cycle on Facebook here.
This review was written by Colin Clark.
Posted by ColinsPRW at 12:03:00