I love splits and I love checking out bands from Europe that I’ve never heard of. So when I came across a split by French acts Kids Against Crosses and François Freygolo I was keen to check it out. There isn’t much about Kids Against Crosses on the Internet except what I could find on their Bandcamp page. I discovered that they are from Cagnes Sur Mer and they’ve been releasing music since 2010. François Freygolo is a member of the ska punk band Freygolo who are from Nice. I also discovered that the split is being distributed by the always brilliant Krod Records. 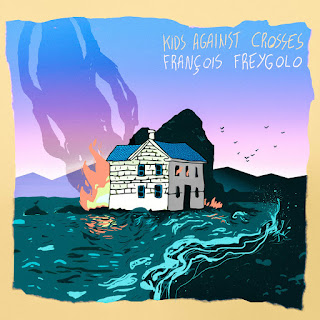 Kids Against Crosses begin the split with their song Last Chance To Be Worried. This is an acoustic guitar lead song accompanied by a trombone. If you’re aware of Gainesville’s Coffee Project (featuring Buddy from Less Than Jake), you’ll get an idea of the sound. The song begins quietly with some soft guitar playing and the vocals. The vocals immediately catch my attention with their powerful delivery and the fact that they’re much poppier than I was really expecting. When the trombone comes in it’s a very nice surprise. This is a very loud sounding acoustic punk song and I’m into it. The duo’s second song is titled Casino. What really struck me about this track when I first listened to it was how much I wanted to sing along with it. I can fully imagine being in a tiny room packed with people singing along so loudly that you drown out the singer’s vocals. That sort of thing gives me goosebumps. The Kids Against Crosses half of the split is faultless and I’ve discovered a favourite new band.

François Freygolo’s first song is titled What Haven’t I Got. I was surprised to discover that this is actually a full band effort as I was expecting just a man with his acoustic guitar. The song starts in a big way with some big “whoa-ohs” to get things going. From that moment I was excited to see where the track would go. Much like Casino, the song feels like a sing-along from that opening moment. I think it’s fair to say François’ vocal isn’t as poppy as the chap from Kids Against Crosses. This is countered with some great gang vocals that made me feel like a part of the song. Punk is about being inclusive and What Haven’t I Got certainly gives you that feeling. It’s Gonna Rain is a softer and slower track that includes a xylophone and a string accompaniment. It’s a nice contrast to What Haven’t I Got and shows a different side of François. This is a sad love song where François sings about how his mental health puts a dark cloud over him even when he feels like he should be happy. Something I’m sure a lot of people will relate to.

Check this split out and then go and listen to all of Kids Against Crosses and François Freygolo’s other work. You won’t be disappointed.
Stream and download the split on Bandcamp here.
This review was written by Colin Clark.
Posted by ColinsPRW at 12:18:00