Album Review: Slurring The Rhythms by Shut Up! Twist Again!

One of my favourite recent discoveries is Shut Up! Twist Again! The four piece are from Bayonne, France and play a great mix of indie punk and orgcore. In recent years we’ve discovered bands such as Quitters and Traverse who also play a similar sounding style, it seems as if there’s something in the French punks’ water that produces this awesome sound. In August Shut Up! Twist Again! released their third full length album and their first in five years. Titled Slurring The Rhythms, it was released by a whole host of labels including Guerilla Asso (France), Fond Of Life (Germany) and Paper + Plastick (USA). After listening to just a few seconds of the opening song I knew this was an album for me. 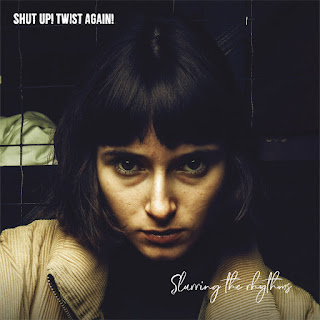 The eight track album begins with Prison Notebook. If this is your first time listening to Shut Up! Twist Again!, like it was mine, then this is a perfect introduction of what to expect from the band. Mid-tempo punk rock which makes you want to sing along as loudly as you can with a your best pals and favourite strangers in a sweaty basement. As you might expect, there’s a huge amount of gang vocals throughout but there are also some quieter moments that allow the song to build towards the big moments. A solid opening track. Up next is Panegyric. Panegyric is a word that I’ve never heard before so I had to look up its meaning. It’s defined as “a public speech or published text in praise of someone or something”. The track is about remembering someone that you’ve lost and living your life the way that they told you to. The song starts out it a sombre mood but as it progresses it the sound grows and some sweet gang vocals arrive to really drive home the last couple of lines of the track – “I know I got more tears to share, I’m exactly what they told me to be.” The third track is Meritocracy. From the outset this song had me banging my head along to the pounding drumbeat. It’s one of the shortest on the album and wastes no time in getting to its big chorus. I really loved the punchy, stabby nature of the guitars and how they contrast brilliantly with the more melodic sounding vocals. Despite only being two minutes long, the band have squeezed a lot into the song.

Outsiders features Oskar from The Kendolls and Tear Them Down. Outsiders asks the question of what becomes of the people who don’t fit into society? This is one of my favourite songs on an album packed with fantastic songs. It takes you on a series of highs and lows, there’s softer moments, moments of real intensity and moments that will bring people together. Having Oskar’s more intense vocals on the track was a masterstroke of an idea. It adds such an interesting extra dimension to the song that really makes you pay attention. To Our Friends is a forty-five second instrumentation that leads into The Past Is Over. Listening digitally it’s a nice interlude that also serves as an introduction to the next song. I assume that on the vinyl version of Slurring The Rhythms it starts side B. The Past Is Over starts loudly as the drums go off like cannons and the guitars buzz along with them. As the intro progresses, the drums begin to mute and the guitars take over. Much like Outsiders, we’re taking on a series of highs and lows. Being a four minute long track this allowed for a seriously good instrumental moment to finish the song that allows the songs message to really sit with you when the track has finished. It was about how things can get better despite everything seeming as if it won’t.

The penultimate song is a cover of fellow French punks The Traders’ song Forgetting Our Duties. I have to admit I had never heard of The Traders before this so had to do my research – they sound awesome. Check them out. The Traders version is a very rough and ready style of punk rock. Shut Up! Twist Again! add their own distinct style and melodies to the track whilst not stepping far from the original song. The addition of some harmonies was a great touch. It’s a political song about how the people who are supposed to be in charge are not very good and not doing their job properly. Something that we in the UK can heavily relate to. The final song on Slurring The Rhythms is New Kind Of Liars. This is an epic way to finish the album. The song has a slow build to open with a chugging guitar alongside a more riff heavy one. It builds and builds until the vocals come in and have you gagging to sing along with them. After the first verse there is an extended instrumental section before the gang vocals come in for a huge chorus. This is another moment that has me longing to be in a sweaty basement shouting my lungs out. This transitions into a chanting section, another long instrumental before finishing the whole album with some more of those ace gang vocals.

Like I said at the beginning, Shut Up! Twist Again! are a recent discovery. I’ve been listening to Slurring The Rhythms a lot since discovering it and I can see it placing very highly on my albums of the year list in December. Do yourself a favour, check this out.
Stream and download Slurring The Rhythms on Bandcamp here.
Like Shut Up! Twist Again! on Facebook here.
This review was written by Colin Clark.
Posted by ColinsPRW at 13:24:00