Reading three-piece Launch Control have recently released a brand new EP named Attention Economy and it’s really good. To be honest that should be enough for you to go and check it out but, if you need to know more, read below. 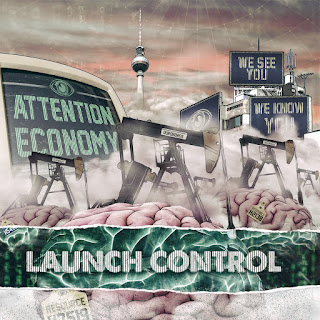 The five track EP begins with Zombigots. I was quite surprised when the song started acoustically. This quieter sound really made me listen to the lyrics of the track. It’s not long before the song switches to full band however. I liked the contrast of the sombre acoustic beginning and the angry full band conclusion. The track is about how the UK is full of older, bigoted people and how it’s time for an uprising to make a change. The song is just over a minute long but packs in a lot in to start the EP brilliantly. The second song is the EP’s title track, Attention Economy. I was immediately struck by the delivery of the opening lines, with just the vocals delivered in a punchy way and some drums before some melodic guitar joins in. The way the vocals are delivered throughout the entire EP really interested me, there’s a rap-like style to them that gives Launch Control a different sound to any of their peers in the melodic skate punk scene. The song takes aim at the way in which products are advertised online and how the Internet has algorithms to show you things that it has learnt you like form searches. It’s really scary how much data companies have about you and this song brings that to light.

Cult Of Ignorance starts in more of a traditional melodic punk style. It has me thinking of a less raspy Rise Against and I love that. As the track progresses, the band get a bit more experiment with some additional synths giving the song a wonderful atmospheric quality. I’m pretty sure they also use the same sound effect that the Transformers use when they transform. I really hope that’s true. The track is about those fine folk (sarcasm) who spew out their uninformed, uneducated views and won’t listen when people try and retort with their own side of an argument. The penultimate song is titled Paper Tiger. Paper Tiger is about the person who seems to be the most powerful not being as strong as they think and the people beneath them coming to take them down. Again, Launch Control are not afraid to add different sounds and styles into their music, making them so engaging. One slight negative about the song is that I felt that the final moments of the song were crying out for some gang vocals, but to be fair I love gang vocals in every song. The final track is the five minute long Marketing For Martyrs. Sometimes I feel like I overuse the word epic when describing songs but I can’t think of a word that fits this song better. This is an emotional and powerful song that truly takes you on a journey. The track begins with what’s basically a spoken word section, before moving to uptempo melodic punk before finishing with what I can best describe as a hip hop/rap style. It’s incredible how Launch Control have moulded these styles together so well. If I could only pick one song from this EP to see live it’s Marketing For Martyrs. It’s such an impressive song and the perfect ending.

Despite being aware of Launch Control for a couple of years now, this is the first time I’ve given them a proper listen and I’m so impressed. What I loved was how fresh they sound compared to a lot of bands in their genre. If you, like me, are finding the melodic skate punk style a bit stale then you really need to check out Attention Economy.
Stream and download Attention Economy on Bandcamp here.
Like Launch Control on Facebook here.
This review was written by Colin Clark.
Posted by ColinsPRW at 12:12:00